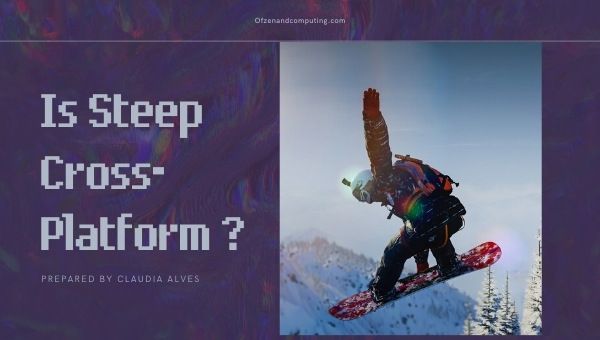 Steep is a multiplayer extreme sports video game developed and published by Ubisoft. The game is set in the Alps, where players ski, snowboard, wingsuit, and paraglide through mountain ranges and valleys.

Cross-platform gaming refers to the practice of playing video games between or across different systems. For example, you could play Minecraft on Xbox One with a player who is using PS4. It's gaining popularity for many reasons. Still, the main reason is the convenience it offers to gamers who want to play with their friends on different platforms without having to buy a new console or buy each version of the game separately.

That brings us to the game in question - Steep. If you are already a fan or someone who wants to buy this game, then you must want to know - "Is Steep cross-platform in 2022?". We'll explore the answer to that in this blog post.

Steep is an open-world sports video game that was developed by Ubisoft. It can be played on PC, Xbox One, and PlayStation Network (PSN). The release date for the game was December 2016 worldwide, with different regional subtitles.

Steep also has a version of eSport games called Steep World Tour, which allows gamers to compete in various championships held across the world. All you have to do is download it from the PlayStation Store or Microsoft Store free of cost. Gamers can choose between numerous disciplines, including snowboarding, skiing, wingsuit flying, and paragliding while playing this fantastic extreme sports title.

Its gameplay includes single-player and multiplayer, where you can either play with friends or the world. Steep even allows gamers to create their own events by setting up checkpoints, choosing a point of view, uploading tracks, etc. It also has a "trick system" similar to Skate and SSX, which allows players to perform tricks during skiing, snowboarding, or wingsuit flying.

This trick system includes a "steerable" air control option as well as a body rotation technique. Steep also has a platform called World Tour, where gamers can compete in different championships with other athletes worldwide.

There's no denying the fact that Ubisoft delivered a fantastic product with this extreme sports title, and gamers seem to love every bit of it! It is an amazing game that lets you experience extreme sports, but what about cross-platform gaming compatibility on PC and consoles such as Xbox One and PlayStation Network (PSN)? The answer to that is in the next segment. Let us explore!

Unfortunately, Steep is not a cross-platform compatible game in 2022. This implies that gamers on different platforms will be unable to play Steep with their pals. For example, a player on PlayStation Network (PSN) will not be able to play with a friend on a PC. Sadly, gamers cannot enjoy the extreme sports video game Steep with whoever they want because of its cross-platform limitations.

Single-player and multiplayer gameplay indeed comes with certain challenges. Still, it doesn't mean you should stop trying new things altogether! That being said, the lack of cross-platform compatibility does not mean the game is completely dead. There are still plenty of gamers who play Steep on your platform, so there's no need to worry about that just yet!

Still, we cannot stress enough how much difference cross-platform functionality makes in a game. Some of its advantages include:

For the most part, though, gamers are not fond of buying games that do not support cross-platform gaming compatibility. They want their friends on other platforms to be able to play with them no matter what!

Is Steep Cross-Platform PC and PS4/PS5?

No, Steep is not cross-platform between PC and PS4/PS5 as of 2022. This means that PC and PS4 users cannot play Steep alongside each other.

The only possible way to play this game with your friends is by owning the same gaming platform. This isn't very pleasant because all our platform choices are different, so there will always be people who will be left out of the group.

Is Steep Cross-Platform Xbox One and PC?

No, there is no cross-platform support between Xbox One and PC for playing Steep. Due to this, if a player owns Xbox One, then they cannot play with some using PC. This is because Steep is not a cross-platform game.

Ubisoft did a wonderful job creating Steep, but this game needs to have cross-platform compatibility if it wants to be played by more gamers.

Is Steep Cross-Platform PS4 and PS5?

No, Steep is not cross-platform between PS4 and PS5. So, even after playing with consoles of the same brand, you and your friend will not be able to play together. In other words, the gameplay is not possible between PS4 and PS5 while playing Steep.

Although this game has a strong community, it would be better to add this type of feature in its next update.

Is Steep Cross-Platform Xbox One and PS4?

Steep does not have cross-platform compatibility between Xbox One and PS4. The lack of this feature will prevent the players from Xbox One and PS4 from playing Steep with each other.

Playing multiplayer mode of a game with your friends is one hell of an experience, which is still far from reality for the players who don't own the same gaming console.

No, cross-play is not possible between Nintendo Switch and PC in Steep. This means that players owning Switch console and PC cannot play Steep together.

However, this is because Steep is not available on Nintendo Switch. So, first, the devs will have to make it available on this platform. Only after that can we expect cross-platform compatibility from it.

2. What is cross-generation compatibility?

3. What's the difference between cross-gen and cross-play?

Cross-gen is a technical term that defines the ability of certain video games to support gameplay between different generations of consoles. On the other hand, Crossplay allows gamers from all over the world to compete against each other regardless of what gaming platform they are using.

No, Steep is not cross-gen. This means that even the players using the same console brand cannot play Steep together if they are using different generation models.

6. Why cross-platform support is important?

Cross-platform support is very important because it allows players to connect with each other regardless of what gaming platform they are using. This means that more people can enjoy playing the game together.

7. If a game is cross-platform then it must be cross-progression?

8. What is the future of cross-platform gaming?

The future of cross-platform gaming looks very bright. With the continuous development of technology, it is very likely that all video games will be cross-platform in the future.

Check More: Is World of Tanks Cross-Platform in 2022?

Steep is a wonderful game that many gamers can enjoy, but players cannot enjoy the whole experience of Steep if they are not playing with their friends. Why? Because some people will always be left out due to a lack of cross-platform compatibility!

However, the cross-platform feature is not a parameter to how good a game is. That's why we would still recommend you to play it, if not with your friends, and then some other gamers online. That would be all for "Is Steep cross-platform in 2022?". We hope you enjoyed it!