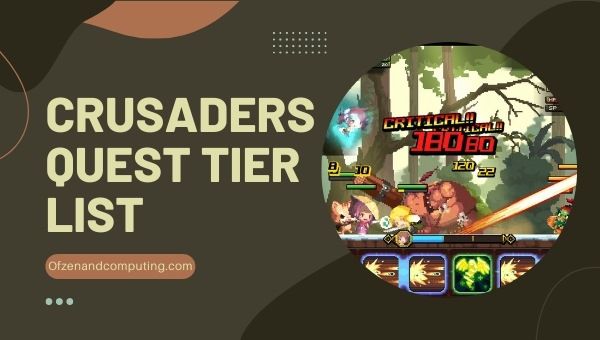 Crusaders Quest is an action RPG game that was released in 2014. The game is set in a fantasy world and has a unique art style. Crusaders Quest has a variety of different characters, each with its own unique abilities. The characters are split into different tiers, with the highest tier being S.

The Crusaders Quest tier list will rank the heroes as per their usefulness in the game. The list will be based on the character's abilities, their stats, and how easy they are to use. It will help the player decide which character to use and when.

Whether you are returning to the game or starting it for the first time, this tier list for Crusaders Quest will be helpful. It will help improve your game and also make it easier. So, read on to find out which are the best Crusaders Quest heroes.

In Crusaders Quest, players take control of a team of four heroes and battle through waves of enemies in order to reach the boss of each stage. The game features a variety of different heroes, each with its own unique skills and abilities.

So in order to make the right decision as to which hero would best suit your style of playing, we have compiled a tier list of the best heroes in Crusaders Quest!

A tier list is a ranking system that allows players to rate the relative power of characters in a game. In Crusaders Quest, there are five different tiers, with S being the highest and D being the lowest. There are six classes - Warrior, Archer, Hunter, Paladin, Wizard, and Priest. Each class has its own unique skills and abilities.

The Crusaders Quest tier list will help in seven other ways:

There are five tiers in each class - S, A, B, C, and D. Each is ranked as per the average power of the class.

S Tier: These heroes are the strongest tier in the game and are considered to be nearly overpowered. They have great skills, high damage output, and are very versatile.

A Tier: These heroes are strong and offer a lot of utility. They may not be as strong as the S class, but they make up for it with their unique skills and abilities.

B Tier: These heroes are decent, but they are not as strong as the A or S classes. They have some good skills, but they lack the power to take down enemies quickly.

C Tier: These heroes are weaker than the B class, but they can still hold their own in a fight. They have some useful skills, but they are not as strong as the other classes.

D Tier: These heroes are the weakest in the game and should be avoided if possible. They have very few useful skills and are easily outclassed by the other characters.

Now that you know all about the tier list, it's time to choose your character! Check out the next section to find out which class is right for you!

The Warrior class is a great all-around class that excels in close-quarters combat. Warriors have high health and damage output, making them great tank characters. They also have a variety of skills that allow them to stun, knock back, and even disarm their enemies.

Archers are a long-ranged physical damage dealer class in Crusaders Quest. They have high single target damage and good mobility, making them a great choice for most player roles. In this tier list, we'll be taking a look at the best Archer heroes in Crusaders Quest!

The Hunter class is one of the most powerful classes in Crusaders Quest and can easily take down even the strongest foes. They are incredibly versatile and can be built to fit any playstyle In this tier list, we'll be taking a look at the different Hunter builds and rating them from S-tier down to D-tier.

Wizards are the glass cannons of Crusader Quest. They have high damage output but low health pools, making them susceptible to getting taken out quickly. However, their skills can be devastating if used correctly.

1. Which class should I main in Crusaders Quest?

This is a difficult question to answer. It depends on what you're looking for in a class. Do you want to deal the most damage? Be the warrior? Have the best crowd control? The answer may be different for everyone.

2. What's the best way to farm gold in Crusaders Quest?

Again, this is a difficult question to answer. It depends on how you like to play the game. Some people are more patient and can farm gold efficiently by doing things such as completing daily quests and selling items they don't need. Others may prefer to spend their time farming dungeons for loot.

4. What are the best gear sets for each class?

It depends on your playstyle and what you're looking for in a gear set. Some people prefer gear sets that offer a lot of damage, while others prefer tankier gear sets.

It depends on the meta at any given time. The Crusaders Quest tier list may change based on new updates or changes to the game.

Tier lists are a helpful way to compare the relative strengths and weaknesses of different classes. They can also help you decide which class you want to main, or what team composition you should use in order to give yourself the best chance of success.

Crusaders Quest is a great game with a lot of different heroes to choose from. It can be difficult to decide which champion is right for you. However, this Crusaders Quest tier list should give you a good idea of the best heroes in the game. Remember, it's ultimately up to you to decide which hero you want to main! Thanks for reading!