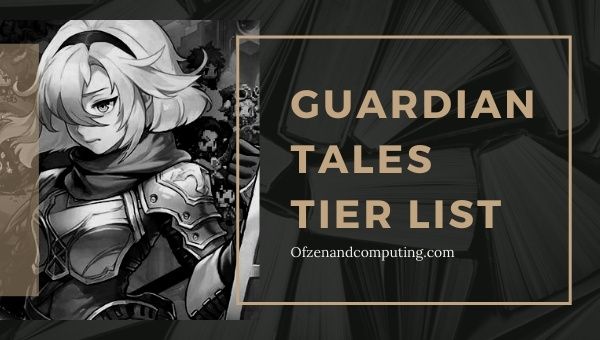 Guardian Tales is a game about heroes fighting in epic battles. Heroes are one of the most important parts of the game because they define your strategy and give you strong advantages over opponents. The Guardian Tales tier list helps you understand which heroes are strongest at any point in time so that you can make decisions based on what will help you win!

The Guardian Tales hero tier list is not a measure of how much you like the character or what your personal opinion on them is, as that would be too subjective and biased towards one faction. Tier list means the list of characters sorted by their power.

In the Guardian Tales character tier list, the best heroes are S-tier. The next tier of good characters is A, followed by B, and so on, with the weakest being D. These are sorted by their power rating so that you can see who is strong in any given matchup.

Guardian Tales is an action RPG from Kong Studio that was released in South Korea on February 24, 2020. It was released on July 28, 2020, in the rest of the world.

The game is played from two perspectives: that of a guardian and his or her human hero who they are protecting. The player can switch between these roles with ease to solve puzzles together, fight bosses side by side, and traverse obstacles without ever having to leave each other's sides.

Guardians are powerful creatures summoned from legends throughout time. When fighting, they use their massive sword (or axe) for melee attacks as well as ranged magic shots which surround them while attacking enemies.

In today's guide, we'll be taking a look at the Guardian Tales tier list.

Guardian Tales is a mobile game where players get to collect, power up and fight with their favorite guardian characters. With over 30+ playable guardians in the Guardian Tales (with more coming), there are plenty to choose from.

The Guardian Tales tier list will take a look at some of the heroes or characters that have been released so far and rank them according to what they're best for.

The best warriors in Guardian Tales are ranked below, from the strongest to the weakest. They're sorted by their power rating so that you can see who is strong in any given matchup.

The best heroes for ranged-based strategies are ranked below, from the strongest to weakest. They are ranked according to their attack damage, ability effects, and ease of use.

The best heroes for supportive roles are ranked below, from the strongest to the weakest. They are ranked according to their healing, buffing, and shielding abilities.

The best heroes for tanking roles are ranked below, from the strongest to weakest. They are sorted based on their endurance (health), ability effects, and ease of use.

1. What is the main objective of Guardian Tales?

The player will take control of a warrior and use his or her skills to fight enemies in different areas. The goal is always to defeat all enemy warriors while protecting your own.

2. What are the benefits of the Guardian Tales tier list?

The tier list is helpful in determining which type of character to take on your journey into this game world. Ranking warriors from strongest to weakest will help you decide who to focus on improving and levelling up.

3. How do I rank the Guardian Tales warriors?

The tier list ranks characters from strongest to weakest, which is how you would also rate them in battle. For example, a warrior with an A ranking for speed will have higher health points and attack power than one with a D ranking for strength.

4. Are you going to make a tier list for the other heroes?

Yes. We will update this list as new characters are added to the game. The heroes ranked on the tier lists will be a selection of those who have been released so far.

5. I don't agree with your tier list. Can you change it?

The tier lists are intended to be a guide for players of Guardian Tales, so feel free to give us your thoughts on why you think certain characters should be ranked differently! We can change the rankings if we get good feedback.

6. How often is this Guardian Tales heroes tier list going to be updated?

The Guardian Tales tier list is updated as new characters are added to the game. New heroes will be included on the list within a week of their release.

7. Why do players use the Guardian Tales character tier list?

The Guardian Tales tier list is useful in helping players choose which characters to focus on. It can also help them decide what their next build should be or whether they want to spend crystals on improving specific heroes.

Tier D is the lowest ranking on the Guardian Tales tier list. These guardians have abilities that are too situational and they don't fit well into many situations.

9. What factors are considered when making the Guardian Tales hero tier list?

The following factors are considered when making the Guardian Tales tier list, in order of importance: the usefulness of the guardian's abilities in different situations, the guardian's stats (health, attack, speed, etc.), how well the guardian works with other guardians.

This Guardian Tales tier list is by no means definitive or all-inclusive. It's a starting point for new players to build on their team with what works best during different encounters and battles in Guardian Tales. We hope this guide has helped you decide which characters are the best for your playstyle.