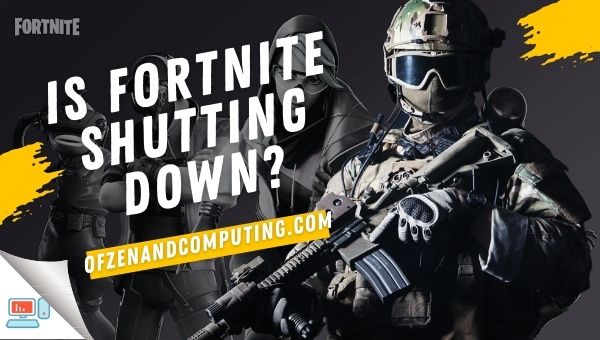 In today's world, daily new rumors and reports of upcoming games begin to spread, and all too often, they turn out to be false.

Fortnite is an incredibly popular video game currently with over 350 million players worldwide. It has taken the world by storm since its launch in 2017, so people were understandably concerned when rumors were swirling that Fortnite is shutting down.

Is Fortnite shutting down? It becomes a hot topic as rumors spread. In this article, we'll address this question and try to put the rumors to rest.

Fortnite is a multiplayer sandbox survival game developed by Epic Games. It's available on PlayStation, Xbox, Mobile, and PC. Players fight to be the last one standing in 100-player PvP while using building mechanics unique to this game type.

It was launched worldwide in July 2017. Since its launch, it has become a cultural phenomenon. The main reason for its success is the way it has integrated itself with social media. It's incredibly fun to stream on platforms like Twitch and YouTube, which definitely helps explain why Fortnite has gained so quickly in popularity.

The gameplay is intuitive and easy to understand. It's incredibly fun because players can build structures in the environment, allowing them to create walls of cover during a battle or an entire fortress around themselves for protection from their opponents.

Players also have access to resources that they need to fight off waves of zombie-like creatures called husks, as well as weapons like shotguns, pistols, and grenades to fight against other players.

The game is so popular that its players are depressed when they hear the rumors that Fortnite is shutting down. So, are these rumors true? Or just a big hoax?

Is Fortnite Shutting Down in 2022?

No, Fortnite is not shutting down. Epic Games has officially announced that they plan to keep the game alive for years, so these rumors are completely false.

Epic Game's CEO Tim Sweeney made an official statement addressing concerns about the future of Fortnite and said, "No plans at all to change or shut down Fortnite." As the official statement, it indicates that Fortnite is not shutting down.

The website claims that Fortnite is shutting down due to all the lawsuits that were filed against them. However, this is completely false, and Epic Games has not announced that they are shutting down Fortnite at any point in time.

React2424 also claims that there is a recently deleted tweet that states, "We are very happy that our game has made us lots of money, enough to hold up the servers. We made many people happy but sadly, we are shutting down due to some recent lawsuits. Thank you for playing."

As mentioned earlier, this tweet is completely fake, and Epic Games did not post it in any way or form, nor have they announced that they are shutting down Fortnite at any point in time.

So, don't worry and don't be afraid. Fortnite is not shutting down, and it's still going to be a popular game for quite some time! Also, don't believe any other rumors about Fortnite shutting down; they're all false.

When is Fortnite Shutting Down?

Till now, we have discussed the rumor of Fortnite shutting down and the reasons behind it. However, there is one more question that has been raised by many people, which is: When will Fortnite shut down?

The answer to this question lies in Epic Games' official statement where they said that they plan on continuing their support for Fortnite.

They have said that they are not shutting down Fortnite at all in the near future, and their plan is to keep it up for years to come! So, there's no need to worry about when exactly will Fortnite shut down; Epic Games has promised us that they won't be doing so anytime soon.

Is Fortnite Getting Shutting Down in 2023?

No, Fortnite is not shutting down in 2023. The developers have confirmed that the game will be around for a while, and we do not see any signs of it stopping soon.

The team behind this massive online multiplayer sandbox survival video game is constantly working on new content to keep things fresh for their avid fans and gamers alike! So, the rumors are false that claim Fortnite is shutting down in 2023.

Also Check: Is Minecraft Shutting Down in 2022?

1. Is Fortnite shutting down news false?

Yes, the rumors of Fortnite shutting down are false. Epic Games has confirmed that they do not have any plans to stop developing this game anytime soon, and it's still going strong. So, just relax and enjoy your time with Fortnite.

2. Is Fortnite going to shut down in future?

No, Fortnite is not going to shut down in the future. As the developers are very happy with the success of this game, they are continuing to develop new content for players. So do not worry and enjoy your time with Fortnite!

3. Why people get depressed after hearing Epic Games is shutting down Fortnite?

People get depressed after hearing the rumors about Fortnite shutting down because it's very popular and addictive. You will see many people playing this game during your daily life, so don't be surprised if you hear more about these kinds of news in the upcoming days!

4. Why people don't want to hear rumors about Fortnite shutting down?

People don't want to hear these rumors because this game is very popular, and many people are playing it every day. It's one of the best games that you can enjoy online with your friends or family, so do not worry if you see more news like this in the near future!

Check More: Is Roblox Shutting Down in 2022?

As you can see, rumors about Fortnite shutting down are completely false. The game is still alive and kicking!

So don't worry if you hear more news like this in the future because it's all fake. Epic Games has not announced any plans of shutting down Fortnite anytime soon, so enjoy your time with the awesome video game!

We hope that this blog post on "Is Fortnite shutting down?" helped you, and do not forget to share your experience with us. Good luck!