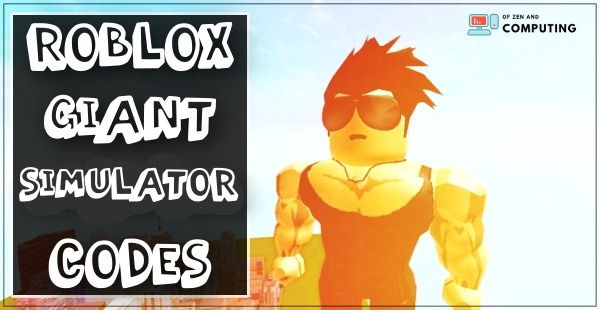 Roblox has a voice that is persistent and professional, reaching all children who are 6 to 17 years old. The main reason for its success is that it has been available on every device they can think of- whether it’s Android, IOS, Windows operating systems or even Macbook and any other devices out there on the market today.

It includes different types of games like action-type ones with horror elements mixed into them and quiz-style puzzles that one might find enjoyable while solving something fun at the same time. In addition to these two categories, you will also be able to explore simulators and fighting-styled video games, too, among many others!

It is a thrill to play simulator games. I am always looking for new ways of playing with my friends, and this game has been one that we have spent hours on in our spare time. Roblox giant simulator is definitely an interesting game; you will never be bored. In today's article, I would like to show off all the Roblox Giant Simulator codes so people can take advantage of them too. If you are its user, then don't forget these helpful tips!

Roblox Giant Simulator is the best out of all. It's so much better than any other game in Roblox. The developers are very active and regularly post Roblox Giant Simulator codes for easy redemption, unlike every other simulator games on here that have no redeeming qualities whatsoever. I am 100% sure you can easily redeem these working codes after reading this article; let us start with some basic information about it now.

What is Roblox Giant Simulator?

In 2019, the developer of the dungeon fail and space mining simulator published another block blaster game called the Roblox giant simulator. This new title got 84K+ likes from its 100 million players and was marked as a favorite by more than 3 lakh people who played it so far!

This is the most competitive simulator on Roblox. In this, you have to make your avatar powerful in all aspects - strong enough to collect loot and legendary pets so they can level up their rank. You must become a giant legend who reigns supreme through super-human abilities if you want to be the strongest player of them all!

What are Roblox Giant Simulator Codes?

Roblox giant simulator codes are the same as promo codes you use when you do online shopping. These Codes can help in getting gold, snowflakes, and quest points free of cost. So what are you waiting for? Redeem all the codes before they expire! In the next section, I will guide you to redeeming these codes by using these simple steps with screenshots.

Collecting gold and snowflakes can be difficult in a Roblox giant simulator. To get these items for free, players use codes that they redeem easily in just seconds! I'm going to walk you through the steps of how easy it is:

2. Now, open the first game and click on the green play button. Wait for a few seconds so that the game gets loaded.

3. After that, when the game is loaded, search for the white twitter icon which is present on the side of your screen.

5. After that, copy the code and paste it in the blank space.

6. After, successfully pasting the code, click on the submit button.

The instructions on how to get a lot more out of playing Roblox is now at your fingertips. All it takes is entering some promotional or coupon code into their site, which makes almost everything 100% FREE, including Gold Snowflake Quest Points.

The developers of the game are active, which is why the Roblox giant simulator became very popular. I know that it's not everyone's cup of tea to be pro in all games - but don't worry. In this section, I will guide you with a list of Roblox giant simulator codes so you can redeem them and enjoy yourself like never before.

In just a few seconds, you can have access to all of the latest Roblox giant simulator codes. All you need is an account and these fabulous codes! Simply copy them one by one, and redeem them according to the steps listed in the last section. It's that simple!

Now, I am hoping that the above list results well and you successfully redeemed all the Roblox giant simulator codes.

The codes are declared as expired, but they might still work. I'll give you the best ones that have a chance of working.

The Roblox Giant Simulator is a top-rated game for all ages. In fact, it's so addicting that millions of people are active on the platform every day. The best part? You can play with your friends and make up a whole new world for them to explore together. And with these Roblox giant simulator codes, you can play it better and make the most of your experience!

If the Roblox giant simulator codes that you’ve tried have not been working, then make sure to check the spelling of each code and try again, or else give us a comment in our comments box with that code so we can fix it for you!