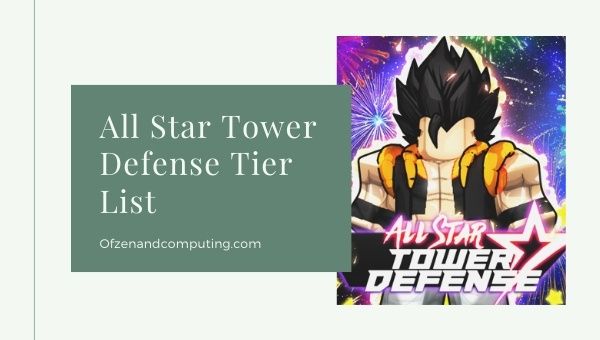 Ever since the release of All Star Tower Defense, gamers have been wondering which characters are best to use and when. With this comprehensive guide, you will know all about what makes each character so great.

This All Star Tower Defense tier list is made after tons of gameplay and its analysis for different characters. So, with a bit of help from this article, you’ll soon have an idea of which heroes are best for your playstyle.

If you are new to All Star Tower Defense, you must be wondering which character is best to play and which character should be played at a particular time. We've ranked all your favorite anime characters in an ASTD tier list. If you're not sure which character to pick, read our article for some pointers.

All Star Tower Defense is an anime-themed Roblox game with a quirky twist. What's more, it can be played on all modern devices. You build towers at intervals in order to stop enemies from getting to you or your base.

All star tower defense is a game with anime-based characters, which doesn't use regular turrets or guns. Completing the storyline and getting on top of the leaderboard is the main goal or objective of the game.

What you usually expect from the genre (e.g., placing towers to stop enemies) has been altered in some significant ways. For example, every character can be used as both an attacker and defender on different lanes.

Heroes are assigned according to their roles, but they also have a level that increases when they do battle. So it's essential to balance attacking and defending tasks accordingly; gameplay includes more than thirty missions across three worlds.

The All Star Tower Defense hero tier list is a list of all the characters in the game and what their strengths are. What makes them so good? What do they excel at?

All-Star Tower Defense has many missions, three worlds to explore, and more than 25 playable heroes. And with this much variance in missions and characters, you need a complete guide about the characters so that you can play them wisely.

We have divided all characters into 4 tiers from our extensive analysis, namely tier S, tier A, tier B, and tier C. Tier S has the strongest characters. In contrast, tier C has the weakest or simply useless characters.

What's on our ASTD top tier list? The top tiers go from being strong across many areas up to those who may have one or two powerful skills but lack them elsewhere. The bottom of the tier has characters having no useful power but many flaws.

This list of the top-tier ranking characters in All Star Tower Defense is updated with the latest patch. As well as providing an overview of every character’s role and Area of Effect to use for each location.

All Star Tower Defense tier list is beneficial for the player who is new to the game so that they can find out which character to play and which to not play in the game. But even if you are not new to the game, you must sometimes change your regular character and do some experiments to get a unique experience. So, keep reading until you find your perfect match.

These characters are the best of the best. They have high power and area of effect, can work in any location with no problems at all, and will help you get to victory quickly.

They are almost like a monster to their opponent and can defeat them in no time. A victory is almost decided for you if you play with these characters.

These are exceptional characters. They have high power and area of effect, but for some reason, they're not quite like tier S quality.

They can work in any location with a few problems at worst and will undoubtedly help you get to victory if you play with them.

All Star Tower Defense tier A characters are:

Tier B characters have lower power and area of effect but can still work in any location.

They will help you get to victory if they are played with proper planning against tier A, but against tier S character, they are almost helpless. Use them wisely, and they may lead you the victory.

All Star Tower Defense tier B characters are:

You can say these characters as almost powerless. With not much power to use against opponents, they also carry too many flaws that can be exploited against them in the game.

You can hardly win a game with these characters and will get only disappointment as a result.

All ASTD tier C characters are:

1. Which character should I play?

This is a very complicated question to answer because there are many characters, and they all have some powers and weaknesses which can be used against each other. But to an extent, we must say it entirely depends upon your play style. But if you are new to the game, you must go for higher-tier characters.

2. Is this All Star Tower Defense tier list updated?

This game keeps updating its character very frequently, so this becomes an obvious question. But we are doing our best to keep it updated, so let us assure you this list is fully up to date with the latest patch.

3. How to unlock characters in the game?

There are different ways to unlock the characters, like other games, it also gives some signup characters, while some are bought in-game. Some characters are unlocked as the game proceeds.

4. What does ASTD stand for?

ASTD is the acronym for All Star Tower Defense. It is a very popular game that is available on Roblox.

5. How much will it cost to buy a character?

There is no exact number that we can tell because some characters are available for free while others have to be unlocked with in-game currency or purchased from the store. But almost all of them can be unlocked by playing the game.

6. What are the benefits of using All Star Tower Defense tier list?

Just like any other game, there is always some unbalance in the character's performance. Some characters are just more useful than others. Having a tier list can help you to know which character suits your play style and makes it easier to choose the right character next time you play this game.

7. Why do players use the All Star Tower Defense hero tier list?

Players use a tier list to make the game more balanced and fair. By using a tier list, they can know which character is more powerful than others and adjust their gameplay accordingly. This way, everyone has an equal chance to win the game.

The C tier is the one which you should avoid because the characters in this tier are not that powerful, and they will not be able to help you much in the game.

9. What is the best way to use a tier list for All Star Tower Defense?

The best way to use a tier list is to first understand your play style. After that, you should look at the strengths and weaknesses of each character. Based on that, you can decide which character is more suitable for you.

We created this All Star Tower Defense tier list to provide a comprehensive guide for selecting the best heroes for each role. They are ranked according to their performance, including stats and skills, with suggestions about when and where they should be used. You'll find out which characters need specific strategies or which ones might be worth investing your time and money to build up.

These rankings are based on some of the personnel experience with each character which can vary from person to person. So if you have feelings about anything that should be changed in the ASTD tier list, then let us know.