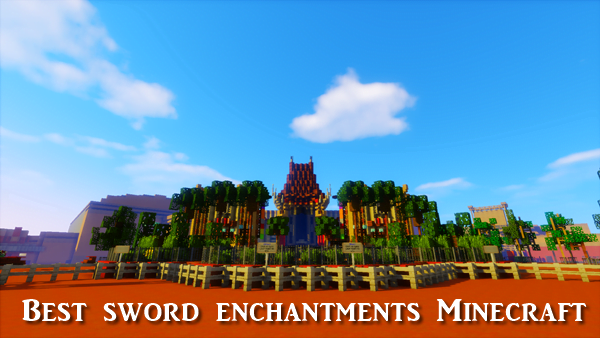 The wait for the best video game for personal computers (PC), got over in the year 2011 when the most popular game "Minecraft" was launched by Mojang Studios. This game is not just for PC, as you can play this on Android, IOS, PlayStation 3 or PS4, Xbox, Xbox One, Xbox 360, Wii U, Nintendo switch, and tvOS also. In this particular article, I will guide you with the best sword enchantments Minecraft, which helps you make your sword more effective.

From the latest resources, it is recorded that, Minecraft has more than 126 million monthly active users across all the platforms, and overall 200 million copies were sold by 2020.

Minecraft offers you to explore your own world and you have to fight with other players and have to save your world by defeating them. For this, you can use any material you have in your world as a weapon.

To kill the mobs, you can make your own block designs and you can also fight with them by punching, or by fishing rod. But the best thing which you should use is Sword, as it the most effective to kill mobs.

In this article, I will let you know Minecraft best enchantments for sword. But, before going to this, you should also know about best Minecraft sword enchantments benefits also. So, let us take a dig towards this first.

As discussed earlier that Sword is the best way to kill mobs, and to make it more effective so that you can kill mobs easily, and also after that you don't need to repair it in a short period, as you have to do earlier.

The advantages and the benefits which you will get by best enchantments for sword Minecraft, are given below:

Also Related: How to Name a Dog in Minecraft

Nowhere, you will get a list which includes the Minecraft best sword enchantments 2020:

The bane of arthropods has max level 5. If you find difficulties while killings mobs like spiders, cave spiders, silverfish, or endermites, then you should use this enchantment. This will help you to increase attack damage against all these arthropods. The Minecraft ID for Bane of Arthropods is 18.

The maximum level of a sweeping edge is 3. Is your sweep attack is weak? and takes more time to give damage?. If yes, then you can easily overcome it by using Sweeping Edge enchantment for Minecraft, as it will increase the damage of the sweep attack. The Minecraft ID for Sweeping Edge is 22.

You can maximize the Fire Aspect level to 2. Are you finding difficulties in setting targets on fire and want to set it? then Fure Aspect Minecraft enchantment will help you as this set targets on fire. Now, to do this you need a Minecraft ID 20.

The smite has a maximum level of 3. Do you find difficulties giving damage to undead mobs? then you should do one thing. You can do the best sword enchantments Minecraft i.e, smite enchantment, as this will help you to increase attack damage against undead mobs. The Minecraft ID for smite is 10.

Knowback can be taken to a maximum of 3 levels in Minecraft. If you are looking for increasing knockback dealt, then you have a good idea and you can do this by doing the enchantment of knockback. The Minecraft ID for Knowback is 19.

You can maximize your looting to the 3rd level. Have you successfully killed the mobs but didn't get satisfying loot and want to increase your loot you can use Looting enchantment, as this will help you in increasing the amount of loot dropped when the mob is killed. The Minecraft id for Looting is 21.

You can take your unbreaking to the 3rd level and it is the maximum. Are your items didn't have much durability to fight against mobs? then you should increase it with the help of unbreaking enchantment for the sword, as this will help you to increases the durability of the item. The Minecraft id for Unbreaking is 34.

The mending tool has a maximum of level 1. This is one of the best sword enchantments for Minecraft, as this will use XP to mend your tools, weapons, and armor. The Minecraft ID for Mending is 70.

Let us know if you need to know about 10 more Minecraft best enchantments for sword.

Also Check: How to Name a Horse in Minecraft

Nowadays, the craze of Minecraft is increasing day by day and the new features keep coming regularly and all players want that their kingdom remains safe from mobs and for that they make enchantments.

Now, I hope that the list of best sword enchantments Minecraft given by me is helpful for you and you love to use them.