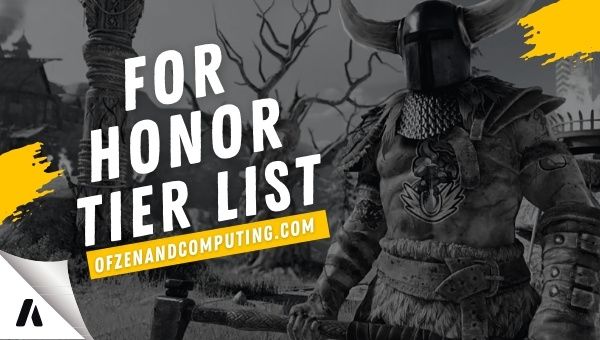 For Honor is an action game where you fight against other players in combat scenarios inspired by historical warfare like duels on battlefields or castle sieges. Each warrior plays differently, so you need to choose the one that best suits your playstyle.

The For Honor tier list is a great way to find out which heroes are better than others. This list provides players with an understanding of the hero's abilities and their matchups against other heroes in For Honor.

The tier lists can help determine what character would be best for you depending on how you play or if you are new to the game! If you're looking for tips to become better at this game, then check out our For Honor hero tier list!

It's no secret that For Honor is one of the most intense and exhilarating games ever made. What might be a little more surprising are the different tiers of characters in this game. Let's take a look at what tier your favorite hero belongs to!

Also Useful: Is For Honor Cross-Platform in 2022?

For Honor - A Quick Introduction

For Honor is a PvP-focused action game by Ubisoft. It was released on February 14, 2017. It has a lot of melee combat and features different classes, including Knights, Samurai, Vikings, and Wu Lin faction.

It has ranked matches and different game modes, including dominion, duel, skirmish etc. It also features a progression system for your heroes or characters in the game. You can change their appearance with customization items available at the rewards shop, which you get by playing the PvP mode of For Honor.

The gameplay of For Honor is much different from other Action games. It heavily focuses on melee combat, and it's not a hack n slash game; you can block enemy attacks to defend yourself or try parrying to make a counter-attack. Because of this reason, the matches are very intense and fun-filled with action. This also makes it difficult for gamers to master the game quickly.

The fighting system of For Honor is unique and different from other games, so it requires a lot of practice to get used to this combat style which you can achieve through playing many matches in PvP mode.

The number of characters in For Honor is large enough to choose from, and the individual skills of each character are different. Each class has their own unique abilities, weapons and fighting style, which makes them a compelling choice for gamers during combat.

If you are new to this game, then For Honor tier list will help you choose the best hero or warrior for you. You can read about your favorite character's abilities and skills before buying them to make sure they match your playstyle.

For Honor is one of those games that is more competitive than people give it credit for. At first glance, the gameplay seems fairly simplistic and doesn't have a big focus on strategy or skill as many other fighting titles do.

In actuality, though, For Honor has some of the most intense battles you will ever experience in a video game, with players working diligently to outsmart and outplay their opponents. With this in mind, it's important to know what characters and movesets should be prioritized when playing against other players online.

For those who haven't invested much time into the game, we've decided to put together a tier list of all heroes so that you can understand which ones are considered top-tier.

There are many benefits of using For Honor tier list, including:

The For Honor tier list ranking goes from S tier to E tier in which S is the best and E is the worst. So, let's get started!

For Honor S tier list includes the heroes that are considered the best in For Honor and should be prioritized when playing against other players. They are very effective and have a high chance of victory. These characters are also great for beginners because they are easy to get the hang of.

For Honor A tier list includes the heroes that are considered extremely effective and should be prioritized when playing against other players. They also have a high chance of victory, but they might require some more practice compared to S-tier characters.

The For Honor B tier list includes heroes that can still be very powerful in the right hands. They are not the top choice in most situations, but they can be good to use if you want to mix things up or counter certain heroes on For Honor S-tier list.

The For Honor C tier list includes heroes that are average when it comes to power. They are not the worst in For Honor, but they definitely won't be as effective compared with heroes on higher tiers.

The For Honor D tier list includes heroes that have a very situational use and should only be used if you really want to mix things up or try something new. If you're new to For Honor, you should avoid using these characters until you get the hang of things.

The final tier list, in my opinion, is the For Honor E tier list, which is made up of heroes that are not very effective and difficult to use when playing against other players online. If possible, we would recommend avoiding these characters unless you want to have some fun.

1. What are action video games?

Action video games are any game in which the gameplay focus is on performing actions, usually physical stunts, with a high degree of difficulty. These games often require quick reflexes and good hand-eye coordination as the player must follow on-screen instructions that appear in a brief window of time.

For Honor tier list is a great way to learn about all the different heroes in For Honor and what their movesets are like. It will allow you to be victorious against players who are using low-tier heroes, and it will also help you understand the best combos so that your attacks can become more efficient and powerful.

3. How to use the tier list for For Honor?

In order to use the For Honor character tier list, you should start by selecting a hero that is on the top of the list. Then, try to learn their combos and best moveset so that your attacks will become more efficient and powerful. You can also practice against bots or another player online in order to get used to playing with this hero before going into matches.

4. Which For Honor tier list includes the best heroes?

The For Honor tier list that includes the best heroes is made up of S-tier characters. These fighters are considered to be very effective and should be prioritized when playing against other players online.

5. Which For Honor tier list includes the worst heroes?

The For Honor tier list that includes the worst characters is made up of E-tier heroes. These characters are not very effective and should be avoided when playing against other players online.

This For Honor character tier list is a collaboration between a variety of other players. It's based on hours of research and experience alongside hundreds of online battles against other people.

7. What is the purpose of this For Honor hero tier list?

The purpose of this For Honor character tier list is to provide information about which heroes are considered the best and the worst. It will allow you to understand more about what each hero can do so that your attacks become more efficient and powerful during combat.

8. How often is this For Honor tier list updated?

This For Honor character tier list is updated on a regular basis in order to reflect the latest changes and developments in the game. However, it's important to note that the rankings may change over time as more people play and discover new strategies.

No, using the For Honor tier list is not considered cheating. It's simply a way to get information about which heroes are considered the best and the worst. This knowledge can be used to your advantage in order to make your attacks more efficient and powerful.

Tier lists are important for any competitive game, especially when you want to get the most out of your For Honor experience. This tier list will allow players to gain a better understanding of how each character works and what movesets should be prioritized in order to become victorious against other online opponents.

We hope this For Honor tier list helps people who are looking for a quick reference guide on what movesets they should learn first or which ones might be considered weaker than others in terms of combat capabilities.

This can also serve as a great guide when you're trying out new heroes so that you can adjust to them easier and know what combos to prioritize.