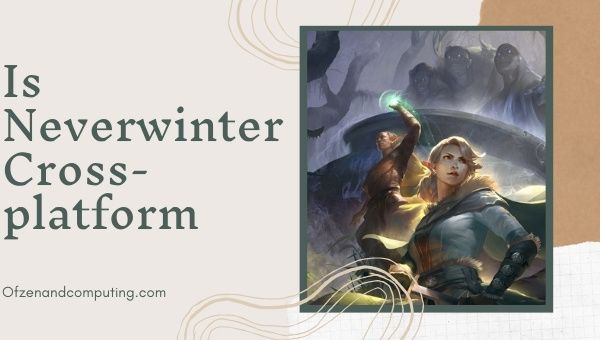 Neverwinter is a great MMORPG that has been around since 2013. It has a lot of content, and it's one of the most popular games on Twitch. It is available on PC, Xbox One, and PlayStation. However, it's not available on Mac.

One question that a lot of people have is whether or not Neverwinter is cross-platform, so we did some research to find out for you. This article will explore this question and get to the bottom of "Is Neverwinter cross-platform in 2022?"

Neverwinter is an online multiplayer RPG that was developed and published by Cryptic Studios.

The game takes the player to a world of fantasy where they can explore the land, interact with other players, start quests or even be part of events in order to help shape their own story about who they are going to become as players make it through different levels.

There are many types of classes for them such these include Control Wizard, Guardian Fighter, and Great Weapon Fighter which all have unique abilities only available for those specific specializations so there will never be any type of repetition among characters.

Neverwinter is an extremely popular game with Twitch streamers and has been in the top ten most-streamed games since 2016. The game was first released for PC on June 20, 2013, then it was announced that it would be coming to Xbox One as well.

The Xbox version of Neverwinter arrived on March 31, 2015. The game was then announced to be coming to PlayStation on July 19, 2016.

Is Neverwinter Cross-platform in 2022?

This is because there are so many different platforms that players may play from and it would be very difficult to make an all-inclusive game. So, PC gamers will never get the same experience as a console gamer playing on Xbox One or PS4 for example.

The developers of Neverwinter have stated that they would like to make the game cross-platform, but for now, it isn't happening.

The developers have also said that making the Neverwinter cross-platform may happen in future. But there are no plans yet so far now. We will just have to wait and see if this ever becomes a reality.

Also Related: Is Monopoly Plus Cross-Platform in 2022?

Is Neverwinter Cross-Platform PC and PS4/PS5?

No, Neverwinter is not cross-platform between PC and PS4. This means that PC players cannot play with PS4 or PS5 players, and vice versa.

It could be possible that the game becomes cross-platform in future. But, as of right now, there are no plans for this to happen. So, keep an eye out for updates on this!

Is Neverwinter Cross-Platform PC and Xbox One?

Is Neverwinter Cross-Platform PS4/PS5 and Xbox One?

No, as of right now, there are no plans for Neverwinter to be cross-platform between PS4 and Xbox One. This means that players on PS4 or PS5 will not be able to play with Xbox One players and vice versa.

It is possible that this could change in the future, but there are no guarantees. So, if you want to play with friends on different platforms, you may be out of luck!

Is Neverwinter Cross-Platform PS4 and PS5?

Yes, Neverwinter is cross-platform between PS4 and PS5. This means that players on either console can play with each other. Although, you might need to get past the first city, or high levels before you can join a party with friends on the other PlayStation console.

1. What if I am a PC player and want to play Neverwinter with my friends who have PlayStation or Xbox consoles?

This is not possible, as Neverwinter is not cross-platform. You can only play with other players on the same platform as you.

2. Why isn't there cross-platform support for Neverwinter?

There are several reasons why Neverwinter is not cross-platform. First, there are many different platforms that people play on, it could be very difficult to make a game that works for everyone. Second, PC gamers may not have the same experience as console players playing on Xbox One or PS4.

3. When will Neverwinter be cross-platform?

There is no set release date for when Neverwinter will be cross-platform. However, it is something that the development team is working on and they hope to have it released in the near future.

4. What are the benefits of cross-platform play?

Cross-platform play allows players to join parties with friends who are on different platforms. This can make it easier for people to find groups to play with and can help reduce wait times for dungeons and other activities. Additionally, it can help players who are new to the game learn from more experienced players.

5. What does cross-generation mean and how does it relate to Neverwinter?

6. What does cross-progression mean and how does it relate to Neverwinter?

There are several reasons why players want cross-platform support. First, it can help reduce wait times for dungeons and other activities. Second, it can help players who are new to the game learn from more experienced players. Additionally, cross-platform play allows people with different gaming consoles to play together.

Neverwinter is one of the most popular MMORPG games on the market. This game has come a long way since its initial release in 2013. If you are looking for a game that offers hours of entertainment and plenty of challenges, then Neverwinter is a perfect choice.

However, if you are looking for cross-platform support, then Neverwinter might not be the game for you. Although there is no official release date, eventually PC players will be able to play with Xbox One and PS4 users in this fantastic MMORPG.

We hope you enjoyed this article on "Is Neverwinter cross-platform in 2022?". If you have any questions or suggestions, please leave a comment below. Thank you for reading!