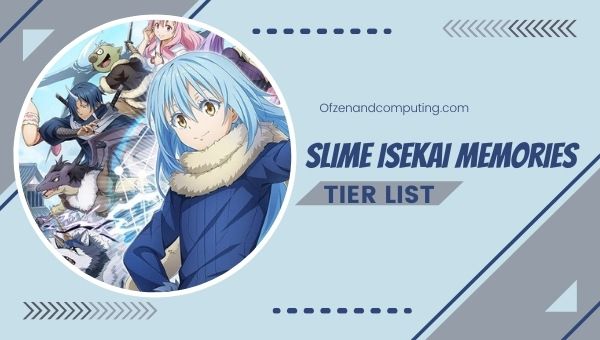 We’ve put together a tier list for Slime Isekai Memories to help you decide which characters are worth investing in, and which ones aren't. Read on for our full ranking of all the slime characters.

Slime Isekai is an evolving game, with new content and updates being released all the time. Characters can be added, removed, or promoted to different tiers as the game develops. So keep your eye on this page, as it will be updated regularly.

Slime Isekai Memories is an idle RPG game for mobiles based on the popular anime, That Time I Got Reincarnated. In the game, players assume the role of a slime who has been reborn in another world and must help defeat the demon king. The game was released in October 2021, and published by BANDAI NAMCO Entertainment Inc.

It is available on Google Play Store and Apple App Store, where you can download the game by entering Slime Isekai Memories in the search box. In-game, players will receive aid from the characters in the anime. For example, the hero will give you a quest. Players can also summon their characters using magic crystals. The objective of the game is to defeat the demon king.

Players achieve this by gathering experience points and leveling up their slime, as well as unlocking new skills. There are also various items that can be equipped in order to boost stats. PvE gameplay is available, where players battle monsters to gain experience and items.

A tier list is a ranking of items, characters or anything really, according to their power or effectiveness. It helps players determine the best items to use at any time.

Slime Isekai Memories tier list ranks the characters according to their usefulness in battle. There are many other benefits of a tier list such as:

In Slime Isekai Memories, the tier list is a ranking system for all of the characters in the game. In this section, the characters are divided into - The battle tier list and the protection tier list. There are five tiers in each category - S, A, B, C and D. Each tier represents how powerful or helpful the character is in battle.

Tier S: Very strong characters that are great for all situations. These characters are very effective when used together with other S-tier units.

Tier A: Generally strong characters that will be useful in most situations.

Tier B: Average characters who are not particularly good or bad at anything. There is no reason to use them over other units with similar rarities unless they have unique skills that make them more effective than others of their tier.

Tier C: Weak characters that are not worth using in most situations unless no other units are available.

Tier D: The weakest and least useful characters in the game. These should only be used as a last resort.

The battle tier list is a ranking of all the characters in Slime Isekai Memories based on their abilities and effectiveness during battles. This rank takes offensive skills into account, as well as other factors such as healing ability or debuffs that can help your team win fights more easily. The higher the character's overall score, the better they will be at helping you beat bosses and enemies.

The protection tier list is a ranking of all the characters in Slime Isekai Memories based on their abilities and usefulness when it comes to protecting your team. This rank takes defensive skills into account, as well as other factors such as healing ability or buffs that can help keep your party alive longer. It takes into account the defensive capability.

1. Who is the best defender in Slime Isekai Memories?

There is no definitive answer to this question. The first thing you should ask yourself is what type of defense do I need? Is it physical or magical damage reduction? Do I want a character that can take hits and survive while my allies deal damage, or do I want someone else to distract the enemy so that they focus their attacks on somebody other than my party members?

2. What is the best defense for my Slime Isekai Memories party?

Again, this depends on what type of defense we are talking about here: physical or magical damage reduction? If you need to protect against both types then there really isn’t anyone character that can do it all so ideally, your whole team should specialize in different areas.

3. What is the best way to reduce physical damage in Slime Isekai Memories?

There are many different ways to reduce physical damage, but some methods are more effective than others. The most common way is to have a character with a high armor stat. Other things that can help include shields, buffs from allies, and items that give you protection against physical damage.

4. What is the best way to reduce magical damage in Slime Isekai Memories?

There are many different ways to reduce magical damage, but some methods are more effective than others. The best way is to have a character with a high magic resistance stat.

5. What is the best way to survive in Slime Isekai Memories?

The best way to survive is by having a diverse team with characters that can tank hits, heal allies, and buff them as well. This will help keep your party alive longer and able to take on even the strongest enemies.

6. How often this Slime Isekai Memories tier list is updated?

This Slime Isekai Memories tier list is updated whenever a new patch or content update is released. This way, you can always be sure that you are using the most up-to-date information when creating your team.

Finally, as a general rule, we recommend using your resources wisely when it comes to summoning new units. There is no such thing as a “bad” unit – they all have their uses and should be used accordingly. The best way to survive in Slime Isekai Memories is by using the Slime Isekai Memories tier list as your guide.

Some units are more powerful than others, so it is important to take this into consideration when deciding which ones you want to invest in! Thanks for reading!