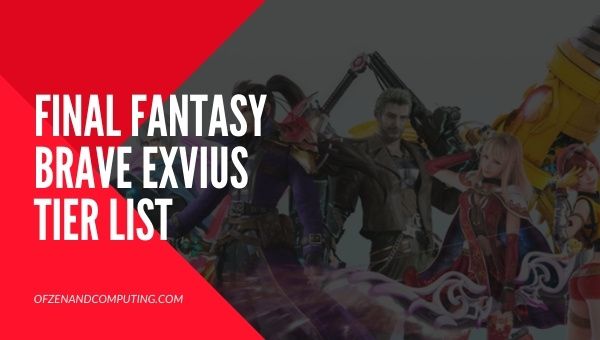 The Final Fantasy Brave Exvius is a mobile game for iOS and Android where you collect characters, battle monsters, explore dungeons, and more! As with most RPGs, there are different types of heroes to use in your party. Just like every other RPG out there, they have different tiers of usefulness.

Tier lists are a great way to rank the strength of characters. It can be difficult to choose which character you should use for your party, so we have put together this FFBE tier list that ranks each unit according to its stats and skills.

Final Fantasy Brave Exvius is a mobile phone game designed by Square Enix and developed by A-Lim. The story takes place in Lapis, where two opposing cultures live: the Kingdom of Grandshelt and the Empire of Zoldaad. Players take control of Rain or Lasswell as they progress on an epic journey to restore the balance between the two realms.

The game was released in Japan in October 2015 and received an English version about a year later. It was released globally for iOS and Android devices in June 2016.

The game is an RPG that features turn-based combat. Players can choose up to five units for each battle, with three active members and two or more support members on the bench. The core of the gameplay centres around using abilities called "Brave Burst" to power through dungeons and battles. There are also special events released regularly where players will have to engage with the story.

As the number of characters in the game is quite large, it is difficult to keep up with all of them. The Final Fantasy Brave Exvius tier list will help players to choose the best units for their party, whether it is in a battle or an event.

A tier list refers to the ranking of units based on their usefulness and power. The best units will make up a team that is able to progress through difficult dungeons while defeating other teams in PvP battles.

Final Fantasy Brave Exvius is one of the most popular games in the mobile phone industry. It has a large number of characters, making it difficult to keep up with them all. However, players will have an easier time progressing through battles if they are familiar with which units work best together and on their own.

Below is a Final Fantasy Brave Exvius tier list that will help players determine which units should be placed on the team. It will also provide tips for each unit, letting players know why they have been ranked as such and what to expect from them in battle.

There are many benefits to being familiar with the FFBE tier list, including:

Make sure that you use the Final Fantasy Brave Exvius tier list when adding new units to your team, as it has proven invaluable time and again for many gamers across the world.

Now, the ranking goes from tier S to tier E, in which S is the best and E is weak.

FFBE S tier list consists of units that are able to defeat almost any enemy in battle. They have very high stats and are equipped with abilities that allow them to easily overpower their opponents. These units are useful in almost any situation and do not have many weaknesses.

FFBE A tier list consists of units that are strong in battle. They have very high stats and abilities, but they are not quite as useful or effective as the S tier characters. These units are very useful when used correctly in battle, but they will struggle against certain opponents.

FFBE B tier list consists of units that have good stats and abilities, making them decent allies to use during battle. They may not be quite as strong or effective as the S or A tier units, but they are still useful in some situations.

These characters do not have many weaknesses and can help turn the tide of battle when used correctly.

FFBE C tier list consists of units that were once good allies to use during battles, but their abilities or stats are not quite as strong or effective anymore. They may also have some weaknesses that make them difficult to use in certain situations, but they are still more useful than the D and E tier characters.

The FFBE D tier list consists of units that are considered to be below average. They have low stats and abilities, making them difficult to use in battle at times.

These characters might be able to turn the tide of a losing battle if used correctly, but they will struggle against most opponents and may even put your team at risk of defeat.

Last on the FFBE tier list is the E tier. This tier consists of units that are considered to be weak in battle and can only be used as last resort options when necessary.

Their abilities or stats may not be any good, leaving them open to attacks from other characters. These allies do not have many strengths and should only be used if no other players are available.

1. Do you have to pay for anything in the game?

There are several things that can be purchased with real money, but there is no requirement to buy these items. It does help speed up gameplay and offers certain benefits, but it isn't necessary either. Players should focus more on enjoying the game rather than worrying about spending their hard-earned money.

The Final Fantasy Brave Exvius tier list will ensure that you know what type of attacks and weaknesses each unit has, making it easier to strategize. It will help you earn more experience points and level up faster than other players who are not aware of which units work best in battle.

The S tier list consists of the most overpowered characters in Final Fantasy Brave Exvius. They are extremely useful and effective, making it easier to defeat any opponent during battle.

The E tier consists of the most useless and ineffective units in Final Fantasy Brave Exvius. They will likely struggle during battle and put your team at risk of defeat, which is why they are placed last on this tier list.

5. What is the difference between a unit's attack and magic?

A character can either specialize in physical attacks or magical abilities. Physical attacks include melee, ranged weapons, and martial arts while magic includes fire, lightning, dark spells as well as other elements. Their strengths and weaknesses will be based on the type of weapon or element used during battle.

This particular Final Fantasy Brave Exvius tier list is updated regularly as new units are added to the game or when older ones are removed. It is important to stay up-to-date on the changes so you can create a more effective strategy for your next battle.

7. Why do players use Final Fantasy Brave Exvius tier lists?

Players use tier lists to create the most efficient and powerful team possible. By knowing which units are strong and weak, it becomes easier to plan out a strategy that will give you the best chance of success.

8. What is the best way to use a tier list for Final Fantasy Brave Exvius?

The best way to use a Final Fantasy Brave Exvius tier list is to find one that is updated regularly and create a team of units based on it. This will ensure that your party is strong and capable of taking on any opponent.

Now that you understand how the Final Fantasy Brave Exvius (FFBE) tier list works make sure to use it when building your team of characters in the game. It will ensure that you are aware of which units work best together and against others. Knowing this FFBE tier list before the battle can help turn the tide if things get tough!

If you want to win more battles in Final Fantasy Brave Exvius, then make sure that you focus on the S and A tier characters. They have proven themselves time and again as being very strong allies in combat, so they should be a high priority when creating your team.