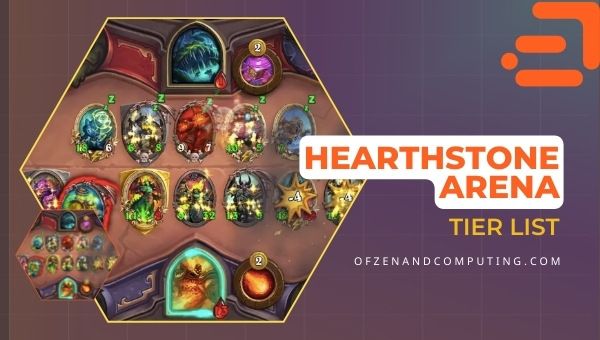 Hearthstone is a game that is constantly evolving, with new cards and mechanics being introduced all the time. This can make it difficult to keep track of the best cards in the game, especially when it comes to the Arena format. In this blog post, we will take a look at the Hearthstone Arena tier list that will be very helpful for you in order to build a successful deck.

Hearthstone Arena is a unique and fun game mode in which players build decks from a random selection of cards. This presents a unique challenge, as you must try to build a deck that can compete with all the other possible decks in the Arena.

In order to help you build your best possible deck, we have put together a Hearthstone Arena class and cards tier list. The tier list is based on our current understanding of the game and is subject to change as Hearthstone evolves.

If you are looking to improve your Hearthstone Arena game, then this list is a great place to start.

Hearthstone is a digital card game developed and published by Blizzard Entertainment. The game is free to play, with players able to purchase additional cards through microtransactions.

Hearthstone Arena is a game mode where players build decks of cards from their collection to battle other players in randomly generated matches. The objective is to defeat your opponent's heroes, and the last player standing wins the match. A match ends when a player's hero reaches zero health or the time runs out.

These matches can end in three ways: victory, defeat, and a draw. Victory is close to what it sounds like; you win the game by defeating all your opponent's heroes before they defeat yours. Defeat means that all of your heroes have been defeated, so you lose the game. Finally, the draw is when both players meet some requirement to end the match, and neither player wins or loses.

In order to win, you need to build a powerful card deck. This is not easy and requires some effort. That's why we have created this tier list for Hearthstone Arena, where you can see all the best cards in the game.

A tier list is a ranking of items or characters in a given context. The purpose of this Hearthstone Arena tier list is to provide an overview of the current metagame and help players choose which cards to draft.

Heartstone Arena is one of the most popular game modes. The game mode is all about drafting the best deck possible with the cards you are given. Winning in Arena is not only based on your skill but also on luck. Therefore it is important to make the best out of what you are given!

The Hearthstone game mode can be very confusing for new players, and that's why we have created this tier list.

There are many benefits of using the Hearthstone Arena tier list, including:

Hearthstone Arena tier list is based on the classes in the game. Each class has different cards that are considered better than others. The tier list is split into five tiers, in which S is the best and D is the worst. Below you will find a list of all the cards in each tier, as well as a brief explanation of each tier.

The best cards in Hearthstone Arena are placed in the S tier. These are some of the most powerful and versatile cards in the game, making them perfect for almost any deck. Cards in this tier should be your top priority when drafting a deck.

Cards in A tier are considered to be very good and should be included in most decks. They may not be as versatile as the cards in the S tier, but they still pack a punch. If you are looking to build a strong deck, these cards should be your focus.

The B tier consists of average cards that are not quite as good as the cards in the A tier but are still worth considering. They may not be great in every situation, but they can still be useful depending on your deck.

The C tier consists of below-average cards that should generally be avoided. These cards are either too weak to be useful or have a very specific use case that may not always come up.

The D tier is the lowest tier of cards and should generally be avoided at all costs. They are way too weak to be used in most decks, so you will rarely see them in competitive play.

A tier list is a ranking of cards or characters in a game, usually from best to worst. The purpose of a tier list is to help players determine which cards and characters they should use in order to create the most powerful deck or team possible.

2. What is the purpose of a Hearthstone Arena tier list?

The purpose of a Hearthstone Arena tier list is to help players choose which cards to draft. The list ranks all the cards in the game from best to worst, allowing players to easily identify which cards they should focus on drafting.

The cards in the S tier are some of the most powerful and versatile in Hearthstone Arena. They can be used in almost any deck, making them a valuable asset for any player.

4. Why is the D tier at the bottom of the list?

The cards in the D tier are some of the weakest and least versatile in Hearthstone Arena. They should generally be avoided, as they will not help you win games.

5. How often will the Hearthstone Arena tier list be updated?

The Hearthstone Arena tier list will be updated whenever there is a major change to the game. This usually happens after each expansion or patch, but it can also happen at any time if card values change dramatically.

6. Why do players love to play in the arena?

Players love playing in the arena because it is a great way to test their skills and try out new cards. It is also a lot of fun and can be very rewarding. Players can win prizes by doing well in the arena, so it is definitely worth checking out!

7. What is the best way to use the tier list for Hearthstone Arena?

The best way to use the Hearthstone Arena tier list is to draft your deck based on the cards in each tier. You should focus on drafting cards from the S and A tiers, as they are some of the most powerful in the game.

8. Is using S-tier cards the only way to win in the arena?

No, you can still win with a B or C-tier deck. However, your chances of winning are much lower. If you want to have the best chance possible of winning, you should focus on drafting cards from the S and A tiers.

We hope that this Hearthstone Arena tier list will help you become a better player and give you an edge over your opponents! It is important to remember that the game is all about having fun, so don't worry if you cannot draft perfectly every time. Just play what feels right for you and enjoy the ride!

If you have any questions, comments, or suggestions, please let us know.

Thank you for reading this article, and good luck with your next draft! We hope that it helps you create better decks in the future!