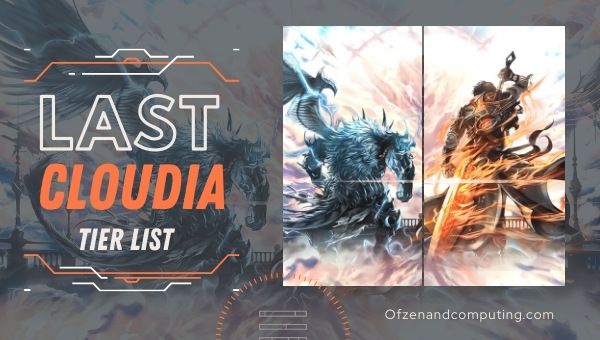 Role-playing games (RPGs) are all about immersing yourself in another world, and Last Cloudia is one of the best examples of that. It features quirky characters, a sprawling tale, and cinematic effects that make you feel like you're right there in action. Our today's blog post is about the Last Cloudia tier list.

The tier list for Last Cloudia is a good way to understand the potential of each character in that game. It is a good way for you to get familiarized with every single one of them before starting your adventure. It will make you a better player as it will allow you to pick the character that fits your playstyle and needs the best.

Last Cloudia is a free-to-play action RPG that was released on April 15th, 2019. It was developed by AIDIS and published by the same company. It is available for Android, iOS, and Windows platforms.

In the game, players take control of a character and must battle their way through hordes of enemies in order to save the world. The game has an immense worldview with a story that is told in the style of a movie. This is thanks to the amazing BGM that accompanies it - players will feel like they're right in the thick of the action.

The game has a huge variety of units that players can train freely, allowing them to craft their dream team with ease. There is also an abundance of quests and achievements for all types of gamers to sink their teeth into, and PvP lets players pit their skills against others in a test of strength.

The cast of voice actors is top-notch, lending even more life to the already immersive story.

The game features a huge variety of characters, each with its own set of skills and stats. This makes it difficult to decide which character you should use, but the last Cloudia tier list can give you a hand in doing so. The list is based on a variety of factors that include stats, abilities, and player preference.

There are lots of benefits of using the Last Cloudia tier list, including:

The last Cloudia tier list is ranked into six tiers, S, A, B, C, D, and E. The S-tier characters are the most powerful and are often the main choice for gamers. As we go down the tiers, characters become less effective for combat. The E tier is reserved for units that are not very useful in battle.

Now, let's start with the best character in the game.

The characters listed in the S tier are considered to be the most effective for combat. These are a powerful warrior that is perfect for those who want to deal lots of damage.

Their skills are also very useful in battle, making him a top pick for any gamer. If you want to be the best player in Last Cloudia, then these are your go-to units.

The A tier is home to some of the best characters in Last Cloudia. They are powerful and useful, but they're not as effective as those who sit on top of the list. These units should be your main choice if you don't want to spend too much time grinding for resources or trying out different strategies.

The B tier is where most of the characters in Last Cloudia reside. They are not as powerful as those in the A or S tiers, but they are still very useful for combat. If you're looking for a character that can hold its own against the enemy, then these are your best bet.

The C tier is home to characters that are not as good as those in the other tiers, but they are still viable for combat. They might not be the best choice for every gamer, but they can be a great addition to your team if you know how to use them correctly.

Characters that are in the D tier are not very good for combat. They might be able to hold their own against weaker enemies, but they will struggle against those who are more powerful. If you're looking for a character that can easily take down your opponents, then these units should be avoided.

The E tier is where you can find the weakest characters in Last Cloudia. These units are difficult to use effectively, which means that they will only lead to frustration and failure for gamers who don't know how to handle them well. If your goal is just to have fun, then these heroes should be avoided at all costs.

1. How does the ranking system work?

The ranking system is based on the overall strength of each unit. In general, units are ranked according to their stats, with higher stats being ranked higher. For example, a unit with a higher attack will be ranked as stronger compared to a unit with lower HP.

2. Why do players use the Last Cloudia tier list?

The main reason players use the Last Cloudia tier list is to determine which character they should invest in. If you're just starting out, then this can be a great way for you to choose your first companion and find one that works best with their playstyle.

3. Which tier includes the best characters?

The S tier includes the best characters in the Last Cloudia. These characters are incredibly powerful and can easily take down enemies.

4. Which tier includes the worst characters?

The F tier includes the worst characters in the Last Cloudia. These characters are not very powerful and can easily be defeated by enemies.

5. How often is the tier list for Last Cloudia updated?

The tier list is constantly being updated as new information about the characters becomes available. This means that it can change at any time, so be sure to check back often for the latest updates.

6. Why do players use the Last Cloudia character tier list?

The main reason players use the Last Cloudia tier list is to determine which character they should invest in. If you're just starting out, then this can be a great way for you to choose your first companion and find one that works best with their playstyle.

The tier list was made by a group of players who have extensive knowledge about the game. They took into account various factors, such as stats, abilities, and popularity, to create the definitive ranking system.

No, using the tier list is not considered cheating. It is simply a tool that players can use to make informed decisions about their game.

Choosing the right character is essential to having a good experience in Last Cloudia. By using the last Cloudia tier list, you can make an informed decision on which unit to use in your next battle.

We hope that this article has helped you become a better player and that you enjoy using the tier list to your advantage. Choose wisely, my friends, and may the best unit win!

If you have any questions or suggestions, feel free to let us know in the comments section below. We love hearing from our readers, and we'll do our best to answer your queries as soon as possible. Thanks for reading!