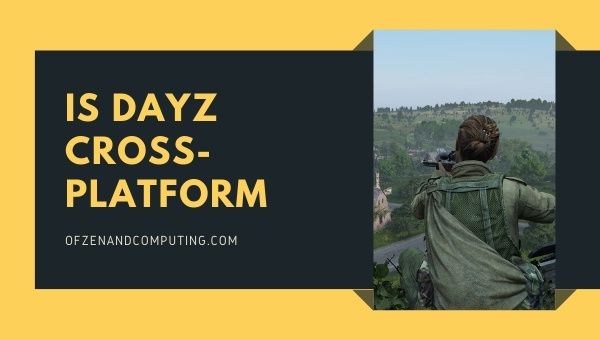 Dayz has been a hot topic in the gaming world for some time now. It's even won awards. Dayz is a game that was created by Bohemia Interactive. It's one of the most popular games in recent history and has been an instant hit with gamers all around the world.

The question for many people is "Is Dayz cross-platform in 2022?", whether or not Dayz can be played on different platforms, which we will answer in this blog post!

Cross-platform means that the game can be played on different platforms such as PC, Xbox One, PS4, and PS5. For example, if you have a PS5, you can play with someone who has an Xbox One. In today's blog post, we will be talking about Dayz and whether or not the game is cross-platform.

Dayz was released in 2018 and became an instant hit with gamers all around the world. The game is a more realistic version of the popular zombie shooter, Left for Dead. Dayz has been described as "one of the most intense and immersive survival games ever made."

In Dayz, the player must survive in a post-apocalyptic world following an unknown cataclysm. The game takes place within 225 square kilometres of the fictional former Soviet Republic of Chernarus. It is currently being developed by Bohemia Interactive and produced by RocketWerkz under Dean Hall's leadership for Bohemia Interactive's proprietary Real Virtuality (RV) engine.

The question for many people is whether or not Dayz can be played on different platforms, so we will try and answer that here in this blog post!

Also Useful: Is Terraria Cross-Platform in 2022?

Dayz is not cross-platform. This means that, for example, if you are playing on PC and your friend is playing the same game on another platform (Xbox and PC), it will not be possible to play together.

There are many reasons why Dayz is not cross-platform:

This means that if you're playing Dayz now, your best chance at seeing what the developers have in store for cross-platform play next year would be by sticking with whatever platform you're on.

Is Dayz Cross-Platform Xbox and PC?

No, Dayz is not cross-platform for Xbox and PC. This means that if you play on PC and your friend plays on Xbox, the two of you will not be able to join each other's games.

The reason for this is due to the different software and hardware that Xbox uses, as well as more stringent online security measures on Microsoft's console.

Is Dayz Cross-Platform PS4/PS5 and PC?

No, Dayz is not cross-platform for PS4 and PC. This means that PS4 or PS5 players cannot play with PC players, and vice versa. If you want to play Dayz with your friends on PS4, then they will need a copy of the game for PC.

To play Dayz as a group on Steam together with your PSN buddies, all players must be on the same server and platform (PC or PS4).

This means that there is no way to have one player playing from their computer while another plays from their console using any method.

Also Related: Is The Forest Cross-Platform in 2022?

Is Dayz Cross-Platform Xbox and PS4?

No, Dayz is not cross-platform for Xbox and PS4. This means that on the Xbox 360 or One consoles, you cannot play with a player playing from their PlayStation devices (or vice versa). It doesn't matter if you are both using the same game; Dayz will not allow for cross-platform play.

There are many reasons why Dayz is not cross-platform for Xbox and PS4. The main reason is that both the PlayStation Network and Microsoft's Xbox Live are considered to be closed systems, meaning they can only communicate with their own gaming devices.

Is Dayz Cross-Platform Xbox and PS5?

No, Dayz is not cross-platform for Xbox and PS5. Reasons why Dayz is not cross-platform on Xbox One and PS5 consoles include different controllers; the difference in resolutions; slower updates than the Xbox version of the game (PSN update frequency); regions using a tick rate that doesn't match the other side's tick rate(s) (Xbox vs. Playstation).

1. Can I play Dayz with my friend on different platforms?

No, Dayz is not cross-platform. This means that if you are playing Dayz on a PC, then your friends will also need to be on the same platform in order for you two to join each other's games (PC or Xbox).

No, Dayz community servers are not cross-platform. This means that if you want to play on a server with your friends who are playing from their PlayStation devices or Xbox consoles, then you will have to choose one of those platforms and stick with it when connecting to the game's servers.

3. What if I am playing Dayz on Xbox 360 or One, and my friend is also using the same game, but they are only a PlayStation device user?

No, this will not work. It doesn't matter what platform you are both using; your consoles cannot communicate with each other when connecting to the game's servers, causing cross-platform play to be impossible.

There are many reasons why Dayz is not currently cross-platform. The most likely reason is that the developers at Bohemia Interactive are still trying to fine-tune the game on each individual platform before they allow players onto different platforms who may have totally different technical requirements.

5. What platforms are Dayz available on?

Dayz is currently available on PC, Xbox One, and PlayStation® 4.

6. What does cross-progression means and is it available in Dayz?

Also Check: Is Neverwinter Cross-platform in 2022?

Dayz is not cross-platform for Xbox and PC, PSN and PC, or Xbox 360 and One consoles with PlayStation devices. This means that players on these platforms can't play together if one player is at home playing from their own device while the other plays outside of this option's limitations.

We hope this article on "Is Dayz cross-platform in 2022?" helps clear up the different platforms and what they can or cannot do with Dayz. Happy Gaming!