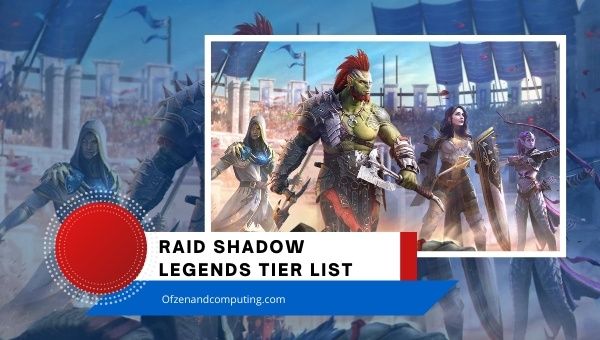 A tier list means that the characters are ranked by their typical usefulness. Tier lists are often made for fighting games, MMOs (Massively Multiplayer Online Game), MOBA (Multiplayer online battle arena), and other competitive video games in which players compete against each other. Today we will discuss the Raid: Shadow Legends tier list.

Raid Shadow Legends is a mobile game that has taken the world by storm. With so many different tactical possibilities, it can be difficult to figure out which champions are best for you. We've compiled all of our data into the Raid Shadow Legends champion tier list, ranking each character based on their effectiveness in battle.

This list will give you an idea of which character you should start out with and which ones you can leave until later. This will also help you plan which heroes you should spend on upgrading at the Forge.

Raid: Shadow Legends is a freemium mobile Role-playing game developed and published by Israeli video game developer Plarium Games. It was released worldwide for iOS and Android devices on July 29, 2018.

The player takes the role of an ancient hero who has been resurrected to defeat a powerful demon called Siroth and free Teleria from evil. The player assembles their own team by recruiting various heroes, such as sorcerers and warriors, to fight various enemies.

There are two types of currency in the game. Silver, which is relatively easy to come by, and Gems, which are a lot more difficult to acquire. The game also has a cost in Energy for running any of the campaign or dungeon stages.

As the number of characters in the game is quite high, we have prepared a Raid Shadow Legends tier list to help you understand which units are best for your team. So, without further ado, let's begin!

Raid Shadow Legends is one of the top-rated games of all time. It has won several awards and is currently among the top-grossing strategy games for mobile devices on both Android and iOS platforms.

That said, it's hard to determine which units you should spend your resources on in order to progress through some difficult levels or simply save yourself from an early grave while playing Raid: Shadow Legends.

That's why we at Ofzenandcomputing have made a Raid Shadow Legends tier list which will help you choose your champions wisely and even give some insight on how to build the perfect team of powerful heroes for this challenging game!

There are many benefits of using a tier list for Raid Shadow Legends, including,

The ranking goes from S to D, in which S is the best unit in Raid Shadow Legends and D is the worst.

Tier S: This tier consists of the most powerful champions in Raid Shadow Legends. If you want to have a perfect team, these are the characters that will help you do it. These characters are not only powerful and strong, but they also help your team in one way or another.

Tier A: These are great units that will aid you in your quest for world domination. You can still use them to run through the campaign or fight some difficult battles, but they're not as effective as characters from tier S and higher.

Tier B: These are decent enough heroes to help you get by until you unlock more powerful ones. They might even give you a run for your money depending on the level and type of enemy you face, but they're not as effective as units from tier S or higher. They'll help you pass through some stages until you unlock better heroes.

Tier C: These are possibly one of the worst units in Raid Shadow Legends since their abilities don't really do much for you in battle. They're not recommended to be used, but you can still use them until you get better ones.

Tier D: These are the worst heroes in Raid Shadow Legends and should only be used if there's no other option or character available for your team composition. You won't see much success with these characters since their abilities don't provide enough support in the heat of battle.

In the Raid Shadow Legends Banner Lord tier list, we have ranked all of the champions based on their abilities and performance in battle. We only considered a hero's ability to fight off enemy units while taking into account his or her strengths and weaknesses against certain types of enemies. That said, let's begin!

High Elf is a great addition to your team if you're trying to build it. These characters can be used in all stages of the game, from campaign and story mode to even more difficult levels with other players. The characters' skills make it easier to take on enemies without worrying too much about their own safety.

In this Raid Shadow Legends tier list, we'll discuss the Sacred Order and which heroes you should focus on in order to get the most out of this RPG game. The characters that are in this list are ranked based on their usefulness in battle and how well they perform against other characters.

In the Barbarian tier list, we ranked the heroes of Raid: Shadow Legends in relative order of their power. The heroes belong to the upper tier if they have a large variety of abilities and skills that can devastate their enemies in battle.

The Ogryn-Tribe heroes are the toughest and strongest units in Raid: Shadow Legends. They can be used to attack, defend, or even do both at once if you know how to utilize their multiple abilities.

The Lizardmen are undoubtedly the best race in Raid: Shadow Legends. They have a lot of different abilities that can be used to turn the tides against enemy units, even if you're outnumbered.

If you want an all-around character that's good for both defense and offense, then the Skinwalker tier list is for you. You can use them to fight against difficult enemies without having to worry too much about their safety since they have different abilities that are useful in battle.

The Orc is a great character to have in your team, especially if you're fighting against other players. They can easily take down their enemies with little effort and can be used in all stages of the game.

The Demonspawn tier list ranks all of the heroes in relative order of their abilities. These characters are extremely useful as they can be used to defend your base against other players and take out enemy units with ease.

The Undead Horde is a great choice for players who want to focus on defense. These characters are able to hold their own against other players and can easily defend your base from enemy units.

The Dark Elf is a great choice for players who want to fight against enemy units and other players. They have lots of abilities that can be used in battle, so you'll never have trouble defeating your foes.

This tier list will help you rank all of the heroes in relative order of their usefulness. The Knight Revenant are great for both defense and offense, making them a valuable addition to your team no matter what kind of opponent you're facing.

The Dwarf tier list ranks all of the dwarf characters based on their usefulness for fighting against both enemy units and other players. They're great to have in an offensive or defensive situation, so they are a good choice no matter what kind of opponent you're facing off against.

The Shadowkin are a great choice for players who want to focus on helping their team with both offense and defense. They have abilities that can be used in either situation, so they're very valuable no matter what kind of opponent you're facing off.

An RPG game is a video game genre where the player controls the actions of one or more characters (as opposed to others in a real-time strategy game). There are many subgenres among RPGs, such as action role-playing, dungeon crawlers, and epic RPGs.

A tier list is a list of characters within the game ranked by their power and usefulness in battle. This includes which hero you should use, who to avoid, etc. Tier lists can include different types of units, whether they're playable or not, depending on the game itself.

3. How to use the Raid Shadow Legends tier list?

The tier list will be ranked by their usefulness in battle, the abilities that they have to take out enemies, and which one is best for your team. It's important to look at this chart when trying to build a well-rounded party since different units provide different kinds of support based on their strengths and weaknesses.

The S tier is composed of the best heroes in Raid Shadow Legends. These characters have a wide variety of abilities and skills that can affect enemies on both offense and defense, making them really useful when you're trying to take out a tough enemy or boss with your team.

5. What is the best Raid Shadow Legends Heroes for beginners?

If you're just starting out in Raid Shadow Legends, then it's a good idea to use some of the heroes from the A tier or lower. These characters are easy to use and have abilities that can be helpful against most enemies.

6. How often is the Raid Shadow Legends tier list updated?

The Raid Shadow Legends tier list is usually updated whenever a new patch or expansion comes out for the game. This allows players to see how the new changes may have affected the power levels of different heroes and units within the game.

7. What is the goal of a tier list for Raid Shadow Legends?

The goal of a tier list is to help players see which heroes and units are the most powerful and useful in battle. This can be helpful when you're trying to build a strong team or party for Raid Shadow Legends.

8. In order to win more games, which tier should I avoid?

The D tier is composed of the weakest heroes and units in Raid Shadow Legends. These characters are not very useful in battle and should be avoided if you're trying to win more games.

The Raid: Shadow Legends tier list will be updated frequently as new heroes are released or buffed, so make sure to check it often! Now that you know what a tier list is and which units belong where you can easily choose which heroes to focus on during your playthrough of the game.

We hope that this Raid Shadow Legends tier list helped you out. If you have any questions or comments, please leave them down below. We hope you have a great day!