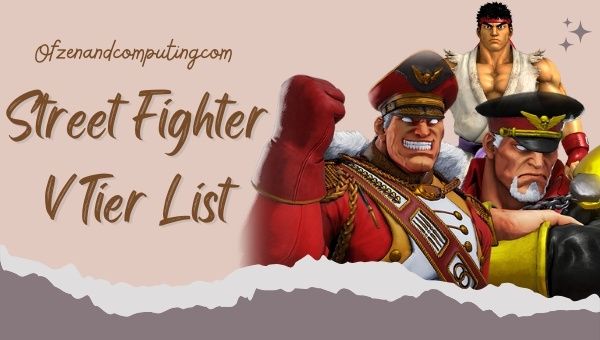 Street Fighter V is one of the most popular fighting games in the world. It has a huge following, but there are so many different characters that it can be hard to know who to pick. That's why we have created this SFV tier list for you - it helps you decide which character best suits your playstyle and what level of player you are.

Street Fighter 5 tier list is the best way to determine which character you should focus on using. It takes into account their offensive power, defensive power, speed, and combos. This tier list can be used by both new and experienced players. Many people looking for the best characters with who they should fight more battles decide based on this list.

Street Fighter V is the latest installment in Capcom's legendary Street Fighter series. The game was released on February 16th, 2016, for the PlayStation® and Microsoft Windows platforms. It has been met with generally positive reviews from both fans and critics alike.

Street Fighter V features a new mechanic known as "V-Gauge," which allows players to perform more powerful attacks by filling up the gauge. The game also introduces new characters to the series, including Laura Matsuda and F.A.N.G.

The gameplay of Street Fighter V is largely unchanged from its predecessor, Street Fighter IV. Players select one of several characters, each with their own unique fighting style, and engage in combat until one player is victorious.

Street Fighter V features both local and online multiplayer. Players are able to face off against opponents around the world or invite friends into a private lobby for some competitive fun. The game also includes several options to make the battle easier, including an "easy special" mode which allows players without much fighting experience to perform complex combos with relative ease.

A tier list is a ranking of characters in a particular game, usually based on their strength and effectiveness. The Street Fighter V (SFV) tier list ranks all of the fighters from best to worst so that you can easily see who is the strongest and weakest. This list is made by analyzing each fighter's moveset and abilities and assigning them a tier.

The highest tier indicates fighters who are the strongest and most effective, while lower tiers represent those that perform poorly in comparison to other characters for whatever reason (usually because they lack abilities or moves).

There are many benefits of using the Street Fighter 5 tier list, including:

The SFV tier list is constantly changing as new updates and patches come out, and balance changes are made by Capcom. As a result, it's important to keep track of the latest rankings so that you can always be playing with the best characters.

So, without further ado, here is the current Street Fighter V tier list:

Note: The ranking goes from S tier to E tier, in which S is the best while E is the worst.

SFV S tier list includes the strongest characters in the game. These are the ones that you should be using if you want to win against other players online or offline. These characters have the best movesets and abilities and are the most effective in any situation.

SFV A tier list contains characters that are more difficult than those in the S tier but still perform well on their own. Players using these fighters should be able to easily defeat opponents not using lower-ranked fighters, but they can expect some difficulty against higher-ranked characters.

Characters in the SFV B tier list are not as strong as those in S and A tiers, but they are still viable options for players who want to win. They may have a few moves or abilities that give them an edge over other fighters, but they can be countered if you know what you're doing.

The SFV C tier list contains fighters that are considered mid-ranged and average in strength, making them a reliable choice for players who want to win without too much trouble. They may not be the best option, but they can certainly get the job done when used correctly with the right strategies.

The SFV D tier list contains characters that are considered low-tier and tend to perform poorly in comparison to other fighters. They can be difficult or even impossible for less experienced players, but skilled gamers may find use with these characters if they know how to effectively counter them.

The SFV E tier list contains the weakest characters that you should avoid using in online or offline play. They perform poorly when compared to other fighters and are considered by most players to be weak, useless options. The bottom of this ranking is for characters who simply can't compete with any others due to their lack of abilities or moves.

A tier list is a ranking of fighters in a particular game, usually from best to worst. The list is often determined by analyzing the characters' abilities and how well they perform against other fighters.

A tier list can be used for several different purposes, depending on who is using it. It may help new, and beginner players choose characters that they should practice with in order to become more skilled at the game. Experienced or better gamers can use them to determine which fighters are best against others so that they know which characters to challenge or avoid during online play.

3. Which tier includes the best fighters?

The S tier includes the strongest and best fighters in Street Fighter V. They are the most effective in any situation and are able to easily defeat other players.

4. What should I do if I'm using a lower-ranked fighter?

If you're using a lower-ranked fighter, your goal should be to try and defeat opponents who are not using fighters from the S or A tiers. You may find some difficulty against those in higher tiers, but with enough practice, you can still win.

Tier lists can be used for several things. Beginner players may want to focus on fighters in the S and A tiers during practice sessions, while more experienced gamers will find that these are best against others online. They can also be used when handicapping yourself or deciding which characters you should challenge during an online match.

6. What is the counter in Street Fighter V?

A character's ability to "counter" another fighter refers to how well they can avoid or deflect an opponent's moves. This means that they should be able to get in some hits of their own while the other player misses, giving them the advantage and opening up different strategies for winning matches.

7. How often is the Street Fighter V tier list updated?

The Street Fighter V tier list is not static and is often updated as new information about the game becomes available. This may include changes in fighter abilities, matchups, or strategies that can affect how they rank against others.

8. Is using a lower-tier fighter a disadvantage?

No, using a lower-tier fighter does not mean that you are automatically at a disadvantage. It may be more difficult to win with them, but it is still possible. With enough practice and skill, any fighter can be viable in online or offline play.

No, using a tier list is not considered cheating. It is simply a tool that players can use to help them make decisions about which characters they want to use.

Gaming is an incredibly fun hobby for people of all ages, genders, and backgrounds to enjoy. Street Fighter V (SFV) tier list is a great tool for players of all skill levels. It can help newbies determine which characters they should learn first and give experienced gamers an idea of who to watch out for when playing online.

We hope that this Street Fighter 5 tier list will prove to be a valuable resource for players in need of some help. If you have any questions or suggestions, please feel free to leave a comment below. Thanks for reading!