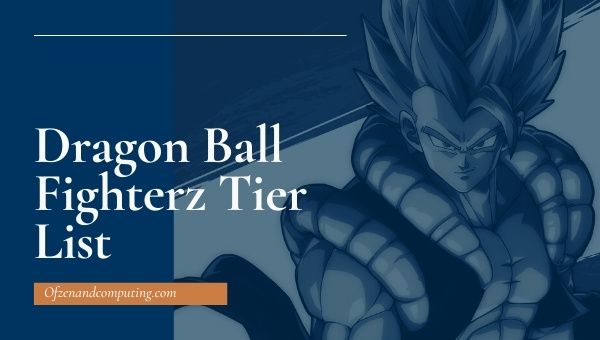 Dragon Ball Fighterz is a fighting game that has taken the world by storm. While there are tons of characters to choose from, some are stronger than others in certain areas. There are also many people looking for information on what characters are good in the game. The Dragon Ball FighterZ tier list will go over all of that information!

If you are looking for the best characters in Dragon Ball Fighterz, look no further. We'll go over all of the different character tiers and where they fall on the list to help you find who is right for your playstyle. The ranking goes from best to worst (S being the strongest).

The bottom DBFZ tier is made up of characters at the bottom who are not worth playing or have low potential. The mid-tier has stronger characters that still need some work, and then finally, the top tier features strong fighters with tons of potential.

Dragon Ball Fighterz is a fighting game developed by Arc System Works and published by Bandai Namco. The game was released in January 2018 for the PlayStation, Xbox One, and PC platforms.

The game is a fighting game that features characters from the Dragon Ball anime franchise, which was designed for two players to play head-to-head. The gameplay is easy to learn but hard to master. Dragon Ball Fighterz has three different modes: arcade mode ranked matchmaking and player matches.

Arcade Mode allows players to fight through the story and complete various challenges. Ranked Matchmaking is a dueling system where you can test your skills against other fighting game enthusiasts. Player Matches allow you to play with friends in private duels or visit public matches that are open to everyone who has signed up.

The best characters in Dragon Ball Fighterz are the top tier. This is made up of fighters with tons of potential who have mastered their skills. These are the people you want on your team if you're looking to be competitive in ranked matches or tournaments, so choose wisely!

The next group is the mid-tier which features stronger fighters that still need work but can do a lot depending on what they find important when fighting. Finally, there's the bottom tier, where we'll go over all of those not worth playing based on how strong they are and how much potential they have at this point in time. So without further ado, let's get into it and take a look at more details about each one.

This is the top tier in Dragon Ball Fighterz. These are the cream of the crop, the fighters with the most potential. If you're looking to be competitive, these are the people you want on your team.

This is the second-best tier in Dragon Ball Fighterz. These are fighters who are strong and have potential. They may not be able to do everything, but they're worth playing if you find the right one for your team.

The B tier includes the good characters in Dragon Ball Fighterz. They're not as strong as the top tiers, but they're still worth playing. They may not have the potential to be great, but they can still hold their own in a fight.

The C tier is made up of characters who are average. They're not bad, but they're not good either. These are the characters that you'll probably use if you're just starting out or if you don't have any other options.

The D tier includes the below-average characters in Dragon Ball Fighterz. These are the ones that you'll want to avoid if possible. They're not worth your time and they won't be able to help you win any fights.

The E tier is the worst tier in Dragon Ball Fighterz. These are the characters that you should never use. They're not strong, they don't have any potential, and they'll only drag you down if you try to use them.

1. What is the difference between tiers in Dragon Ball Fighterz and ranks?

Ranks are based on your skill level, whereas tiers are for how powerful a character is as well as their potential to grow over time. The higher the tier, the more powerful they'll be when fighting opponents of other tiers, but it's not mandatory that you play high-tier characters all of the time, so don't worry about if you can only find someone lower than S!

The only way to get ranked is if you fight someone who's better than you and beat them. Every time you win, your rank will go up a little bit until it reaches the next tier when that threshold has been reached!

4. What does the Dragon Ball Fighterz S tier mean?

S is the highest tier in Dragon Ball Fighterz, so if you want to be one of the best players, then this tier is perfect for you. These are fighters who have mastered their skills and can do anything with ease - they're a force to be reckoned with and should not be underestimated.

5. What should I do if my tier is lower than S?

Don't worry - there are plenty of other players who play characters with ranks that are below the top tier. If you're just starting out, then don't think about your rank too much and just focus on getting stronger, so it goes up!

6. Why are some characters ranked higher than others?

There's no real reason for this other than how powerful they are, so don't worry about if your fighter is low-tier or not. There are plenty of high-tier fighters that you can use to win against lower ones!

7. How can I tell how powerful a character is?

The easiest way to do this is by looking at their tier list ranking. The higher the number, the more powerful they are and the harder it will be for you to beat them! If you're having trouble with a particular opponent, then try using someone from a higher tier.

8. What's the difference between a high-tier and low-tier character?

High-tier characters are more powerful than low-tier ones, plain and simple. They have better moves, and combos, and can take more hits before going down. If you're having trouble with a particular opponent, then try using someone from a higher tier.

9. How often is this tier list for Dragon Ball Fighterz updated?

This Dragon Ball Fighterz tier list is updated whenever a new patch comes out for the game. This means that if a character gets nerfed or buffed, their ranking will change to reflect this. Keep an eye on this page so you always know who the best fighters are!

10. What factors are considered when making this Dragon Ball Fighterz character tier list?

There are many factors that go into consideration when making a tier list. Some of these include the character's moveset, combos, how easy they are to use, and their overall power.

Dragon Ball Fighterz is a game that's easy to get into for newcomers and offers plenty of modes. Whether you want to fight your friends in offline matches or take on AI opponents in the story mode - there are tons of different options!

We hope this Dragon Ball FighterZ tier list helped you figure out which fighters might best fit your playstyle. If you're still not sure, then try playing them in the lab or training mode to see if they work for you!