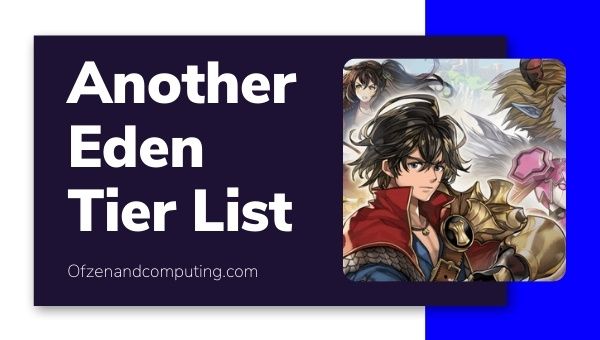 This article will take a quick look at the Another Eden tier list to find out which are the best characters to play. There are some obvious choices, but there are also some surprise entries that might be better than what you're used to.

Another Eden is a time travel adventure kind of game in which the player travels through various times and experiences another level of gameplay. But with this, they also need to know about the characters they are going to play well.

We'll have our Another Eden character tier list, of course, so come along with us and get to know about the best heroes to play in Another Eden.

Another Eden - A Quick Introduction

Another Eden is a single-player game set in a time-traveling environment and has many sci-fi elements. It's a JRPG (Japanese Role-Playing Game).

Another Eden is a mobile game where players can explore different time periods by traveling to them. It was released in Japan in April 2017 and worldwide in 2019 for Android and iOS. It is also being developed for other platforms such as Windows and Nintendo Switch.

Another Eden features the collaboration of some of the most celebrated creators in the industry, like writer Masato Kato and music composer Yasunori Mitsuda presenting players with an epic time-travel adventure.

The Another Eden tier list is a list of the best and the worst heroes in Another Eden. The tier list ranks all playable characters, both male and female, from S to E with varying stats across different aspects such as attack power, defense, cost per level up, etc.

The tier list is mainly useful to newcomers because they want to know which are the starting characters to play. But experienced players also find it fascinating because they want some sort of experiment on their current playstyle.

This list will give you an idea of the power and abilities every hero of Another Eden has so that you can use these characters at their maximum efficiency.

A player can use the Another Eden tier list when they have finished playing through Another Eden sometimes and want to try out new things that may be more fun than what's already been tried before.

Another way a person might come across this list will be if someone has never played Another Eden before but knows about it by word-of-mouth and wants to see which starting character has better stats according to people's opinions on them. These types of players would find the Another Eden tier list helpful.

All Another Eden's characters are ranked from tier S to E, with tier S being the best and E the worst. Another Eden tier list has divided all characters into six tiers:

Another Eden tier S includes the heroes that either have some incredible utility or can deal a lot of burst damage. They are the most powerful heroes out there, so they should be your first choice while choosing.

They are also known as Another Eden best starting characters as they are the most decent ones to start with. They are extremely strong. They are the top choice for beginners in this game.

Let's take a look at them, shall we?

This tier is for heroes with very few drawbacks and a lot of strengths. These are the best all-around picks, as almost every choice in their kits will be helpful at any given time.

They're also incredibly versatile, being able to fulfill a variety of roles effectively. These units usually have it all - although not consistently enough.

This tier contains average heroes whom you cannot rely upon, but sometimes they can surprisingly take over upper-tier heroes. They are not as good as tier S or tier A, but they can be an excellent addition to the team and its composition.

Let's take a look at heroes and their details falling in tier B.

Tier C list is for those who are not the best players in Another Eden. This contains those heroes who have qualities that can make them useful in certain circumstances, such as damage or durability against specific enemy types, but will usually fall short of a higher rank because their other stats are lacking enough.

Frankly speaking, if you are trying to win the match with these heroes against one of the higher-tier heroes, believe me, you will be disappointed.

Let's take a look at Another Eden tier C characters.

Tier D contains heroes who are not useless but are also not likely to be picked. Few people want to play these heroes, and they're unlikely to ever see any competitive time, so don't even consider them.

Let's take a look at heroes in the tier D list.

Tier E consists of heroes considered "too bad" for the previous tiers but not necessarily good enough for tier D or higher. This means that these heroes can be played in Another Eden if you want to play with underpowered characters and experiment more than usual, as they're unlikely to provide any challenge at all.

Let us look at heroes in tier E.

1. How are tiers decided?

Tiers are decided based on a character's currently available kit, their potential to be played in the future, and their general balance against other characters.

2. What is the difference between a hero's power and versatility?

Power refers to the amount of strength a character has in their kit. Versatility refers to how many ways a player can use their kit through different builds and strategies. They both impact tier rankings, as a high versatility hero, will outperform characters with a higher power if they are not versatile enough for specific maps or team compositions.

3. Which heroes are recommended for beginners or casual players?

If they're new to the game, I would suggest heroes who are very easy to pick up and has high damage output. Besides this, it depends on your preferred playstyle as there are many different roles in Another Eden.

4. Which heroes are recommended for advanced players?

Heroes who have good skillset diversity can be played in multiple ways. For example, you should pick up Cynthia if you're looking to play her as a support, DPS/burst assassin, or another form of utility.

The tier list for Another Eden is important because it can help players in their decision-making. With tier lists, you are able to see which heroes are the best to use when battling against different enemies in-game.

6. How often is the Another Eden tier list updated?

The Another Eden tier list is updated whenever a new character is released or when there are changes to the game itself. However, major changes to the tier list will only happen every few months.

7. Which tier should I avoid using?

The E tier should be avoided as the heroes in this tier are generally considered to be the weakest ones. So, unless you're looking for a challenge, I wouldn't recommend using them.

8. What factors are considered when making the Another Eden character tier list?

We know you love your games, and so do we. That's why we made this Another Eden tier list for all of us to enjoy. This is our personal list that was built from a lot of research with other gamers like yourself. Hopefully, with the help of this list, you can find something new to play next time you are bored.

This Another Eden character tier list was made on the personnel experience of gamers so that it may vary a bit among us. What do you think, which is the best composition to play in Another Eden? Let us know.