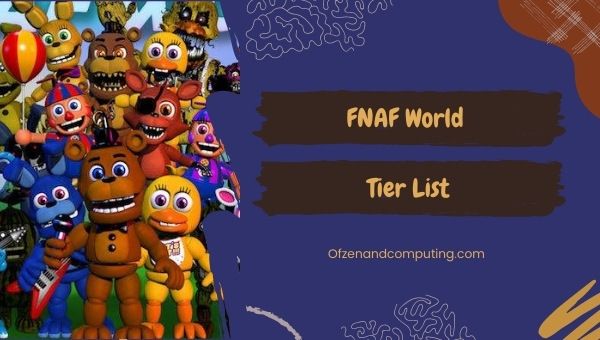 A tier list is a ranking system that ranks characters based on their performance in competitive play or tournaments. It can be used to help players decide which characters they should focus on when playing against other people online.

FNaF World tier list is a hot topic among the Five Nights at Freddy's fandom. The game has been out for a while now, and players have had time to experiment with all of the characters. Some people are adamant that some characters are better than others.

That's why in this blog post, we will take a look at the FNaF World tier list and see what it has to say about the best characters in the game!

If you are a beginner trying to decide which character you should focus on learning first, the Five Nights at Freddy's tier list can help you figure out where a character stands among the rest. So, let's start with our topic.

First released in January 2016, FNaF World is a turn-based RPG set in the Five Nights at Freddy's universe. The player takes control of one character from a party of four and fights against various enemies using their abilities to survive each round of combat.

The game was met with mixed reviews, but fans have since warmed up to it and created FNaF tier lists so they can decide which characters are best suited for their playstyle!

Published and developed by Scott Cawthon, the game is available on Steam and Android devices. The game has two modes: Adventure and Fixed Party. In Adventure Mode, you play through a storyline while choosing your party members at each turn.

The second mode is Fixed Party where there are no new recruits allowed; instead, players pick up three other party members from previous stages before heading into combat against various enemies.

The tier list for FNaF World is a community-maintained list that helps you decide which characters to choose, depending on your personal preference and playstyle.

There are many benefits of the FNaF World character tier list including:

If you're looking to improve your chances of success in FNaF World, then it's important to know which characters are worth using and which ones you should avoid.

In the next section, we'll take a look at the FNaF World tier list - giving you an overview of each character's ranking and what makes them so special! So without further ado, let's get started!

The best of the best. These are the characters that are incredibly powerful and can easily take down most enemies.

These characters are strong and can hold their own in most situations. They're versatile enough to be useful for both offense and defense.

The FNaF World B tier list is the list of characters who aren't quite as powerful or versatile as those in the S and A tier, but they still have some strengths that make them worthwhile choices when playing against certain enemies.

Characters in the FNaF World C tier list are ones that you might want to avoid unless you're up against a very specific enemy. They're not as strong as others and they can be easily defeated by enemies who use certain abilities.

These are the weakest characters in the game, and you'll want to avoid using them if possible. They don't have many strengths and they can easily be defeated by most enemies.

1. What are the criteria for ranking characters?

There isn't one specific criterion that is used to rank characters but generally speaking, the higher-ranked characters are those who are most effective in battle and have the most advantageous abilities.

2. Who is the best character in the game?

There is no one definitive answer to this question, as different characters are better suited for different situations.

3. Which tier is the best in FNaF World?

The highest tier in the game is S, followed by A, and so on. Any character who falls into this tier has very powerful abilities that can make them an extremely valuable asset to your team.

4. Which are the worst characters?

The lowest-ranked characters fall under the D tier. These characters generally have low stats and don't do much damage when attacking enemies with their move sets/abilities - making them less useful than other party members could be!

5. How often is the FNaF World tier list updated?

The FNaF tier list is updated as soon as new information about the game becomes available. This means that it may be updated several times a week, or less often if no major changes occur in the game.

Generally speaking, you should avoid using any characters who fall into the D tier. These characters are very weak and can easily be defeated by most enemies.

The FNAF World tier list was created by professional gamers. They have a lot of experience with the game and know which characters are the strongest.

No, not always. While higher-ranked characters are usually more powerful, they may not be the best choice for every situation. For example, if you're up against an enemy who is weak to a certain type of attack, then it might be better to use a character who specializes in that type of attack.

So, that's our FNaF World tier list! We hope you found it helpful in deciding which characters to play. Remember, everyone's gameplay style is different, so feel free to experiment and find the best combinations for you. Happy haunting!

In the meantime, let us know what you think of our tier list in the comments below. Do you agree with our rankings? Which characters are your favorites? Let us know – we love hearing from our fans!