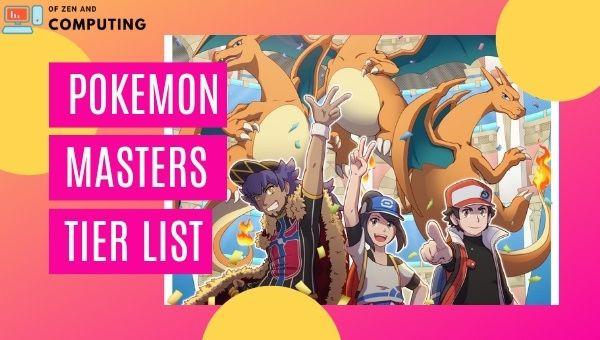 Are you a Pokemon Master EX Player? Do you want to know what characters are best for your team? Look no further because this blog post will give you all the information that you need. We have compiled a list of the most powerful and popular pairs in each type, so if you are building a new deck or looking to switch things up with your current one, then be sure to take our advice.

In this post, we will be discussing the Pokemon Masters EX tier list. This list contains the best sync pairs that you can get. All of these Pokemon have the ability to deal with a large number of types, so you should be able to find one pair that fits your needs.

The ranking goes from "S" to "E," with the higher-ranked players being more powerful than their lower-ranked counterparts.

For those of you who are unfamiliar, a tier list is a ranking system that decides how strong each character in an online video game is based on their abilities and performance.

Pokemon Masters EX is a free-to-play mobile game from the Pokemon company. The game is played on iOS or Android devices. The game features an RPG-style battle system with a variety of Pokemon to collect and train.

The goal of the game is simple: become the best trainer by defeating other trainers around the world. Your success will depend largely on your ability to build various strong teams for specific types of battles as well as developing each individual member of your team from level one up to their maximum potential.

The main goal in this game is to become the new Champion, which means that you need to battle and defeat all. Pokemon Masters tier list is a list of all the best teams in the game and their rankings based on how powerful they are in pairs. You can use this list to help determine what Pokemon you should use against certain opponents!

Pokemon Masters is a mobile game where players can battle Pokemon. But how do you know which pairs are better? Fear not; we're here to help you out.

We have compiled a Pokemon Masters EX tier list in order of strength and effectiveness for battle. This is our way of helping players find "the one" they want to spend their time with and work on leveling up together!

There is a total of six tiers, and the higher you are in the tier, the stronger your Pokemon's sync pair is. We hope this Pokemon Masters tier list will help players find the best teams that suit their needs as well. Let's start with the first tier:

Pokemon Masters EX S tier list has the most powerful teams/pairs. They're very difficult to defeat when used together properly. Powerful teams like this will be able to take on any type of battle thrown at them without much trouble, even if they aren't specialized, which makes these teams amazing choices!

Also Related: How to Fix Pokemon Go Unable To Authenticate?

These Pokemon Masters EX teams/pairs are all really strong and have the potential to take on any type of battle. They're not quite as powerful as those in the S tier, but they won't let you down either!

The Pokemon that belong in this tier may be good at one or two things but just okay for everything else, which means these teams don't do too well against specialized opponents.

If your goal is to become Champion, then we recommend staying away from these pairs since most battles will rely heavily on a specific type of attack, so it's better to find an opposing pair with high defences when using this group.

This list features Pokémon, who usually can only deal out damage due to their low defensive stats. These pairs are usually weak to specific types, so if your goal is just to battle, then you can find some success with teams like these, but they're not the best choice when it comes time for a champion fight!

This list features Pokémon that usually have low defensive stats and can only deal out damage. If you plan on using these teams in battle, be careful not to stack up too many attacks of the same type, or else they'll easily fall!

These teams should still help people win battles against users with less powerful Pokemon if they are prepared for a specific type of attack, though, so don't write them off just yet.

This is the lowest tier possible. They're very weak and won't do well when it comes to dealing out damage which means their best use is probably as defenders who will try blocking incoming attacks from enemies with high defenses.

This group isn't recommended at all outside of training since there's no way this team will fare well in champion battles.

1. What are the benefits of choosing higher-tier characters?

The benefit of choosing higher-tier Pokemon Masters is that you'll be less likely to lose due to them being stronger than their lower-tier counterparts. And if all else fails, the high tiers can always evolve into even greater forms by leveling up or using an evolution stone!

2. What are the benefits of the Pokemon Masters EX tier list?

The benefits of this list are that it will help players find a partner that suits their needs as well. It also has the ability to give you an idea of which Pokemon Masters have higher stats so you can make more informed decisions about your team-building process.

3. How do I use the Pokemon Masters EX tier list?

To use the Pokemon Masters tier list, just search for your chosen character to find out which tier they belong in. There are six tiers, and each one has its own unique benefits that make them stand apart from one another.

4. Do I need to use the same tier characters as my opponent?

No, you don't. You can choose whichever Pokemon Master you like and still be successful in battle whether your team is lower or higher tier than your opponent's chosen characters.

5. Which tier contains the best characters?

The S tier is the best, and it consists of characters that are incredibly powerful and can take on almost any type of opponent. However, even the lower tiers have some great options, so don't feel discouraged if you don't see your favorite character in the top tier. There are plenty of good Pokemon Masters to choose from in every tier!

6. How often is the Pokemon Masters tier list updated?

The list is updated whenever a new batch of characters is released or when there are significant changes to existing ones. However, it's always a good idea to check back often to see if anything has changed since you last looked!

7. Which tier should I avoid?

You should avoid the E tier because these characters are incredibly weak and won't be able to do much in battle. Stick to the higher tiers if you want a chance at winning!

8. What factors are considered when making the Pokemon Masters tier list?

When making the list, we take into account a variety of factors such as stats, moveset, and usefulness in battle. We also consider how popular a character is since that can often dictate how strong they are.

The Pokemon Masters EX tier list is a helpful resource for gamers who want to find the perfect partner for their team. The tiers are broken up into six different groups, with each one offering its own benefits so players can make more informed decisions when it comes to choosing which characters should be on their teams.

We hope this tier list has been helpful for you and that it helps you choose your Pokemon Masters wisely. Good luck with becoming Champion!