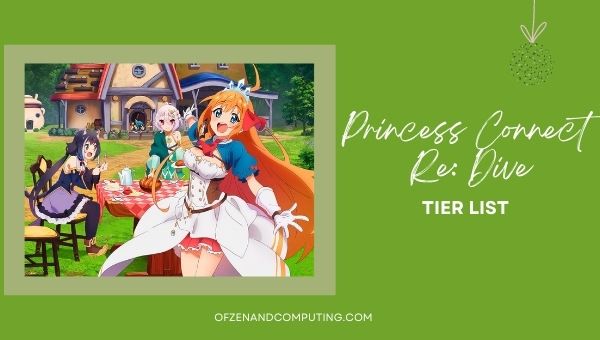 In the Princess Connect tier list, characters have been divided into five tiers: Tier one is where the strongest characters on offer reside; these are also known as S-tier units. As we move down the list, the characters get weaker and are placed in lower tiers. The D-tier is the bottom of the barrel and should be avoided if possible.

Now, before we get into the tiers, let's first take a quick look at the game.

Princess Connect Re: Dive is a mobile RPG game released by Cygames in February of 2018 for iOS and Android devices. It's a real-time action role-playing game that has the player form up to five-person parties to take on quests or other players in PvP modes.

The game features an interesting gacha system for obtaining new party members as well as character-specific pieces called Memory Pieces which are used for special events where characters can only be obtained in this manner.

Clans can be formed to gain entry into Clan Battles, where each player has a chance of dealing damage and taking down the raid boss. Players are also able to chat with one another using either text or emojis within their clan rooms.

Union Burst is a powerful skill that can be manually activated by the player as soon as their Union Burst Meter, also known as TP in-game, is charged. It's best used when your party is in a difficult situation or to finish off an enemy. This skill can only be activated once per battle.

Now that you have a basic understanding of the game let's move on to the Princess Connect Re: Dive tier list.

A tier list is simply a ranking of characters within a game in terms of their strength. The higher the tier, the better they are compared to others within that list.

Princess Connect Re: Dive is one of the most popular mobile RPGs in the world. The characters within the game are all unique, with their own set of skills and abilities that make them valuable at a party. Because of this, it can be difficult to determine which character is best for your specific playstyle.

That's where our tier list comes into play. We will rank each character in the game based on their overall power and usefulness.

The ranking goes from S tier to D tier:

S Tier: These are the best of the best and are incredibly powerful compared to other characters in the game. They are currently the strongest in terms of overall base stats, skills, and abilities.

A Tier: These characters have a high power level that makes them a valuable asset to your party. They're extremely powerful, but they may not always fit into every team composition or lineup. Try using one of these if you want an advantage over the competition.

B Tier: These characters are fairly powerful and can fit into most party compositions. They may not always be optimal, but they're still good enough to get the job done. Try using one of these if you want an average character that's easy to play with.

C Tier: These characters are not as powerful as the ones in A and B Tier, but they're still viable. They may have a difficult time fitting into certain party compositions, so be careful when using them.

D Tier: These characters are the weakest of the bunch and should only be used if there is no other option available to you. Do not use them if you want to win.

Now that you know how the tier list works let's take a look at the list itself.

In this list, characters are ranked based on their overall power, usefulness, and how easy it is to use them. This is the overall tier list for both PvP and PvE modes.

Defensive characters are ones that are best used for protecting your team or yourself from damage. They have a variety of abilities that can help them do this effectively. This tier list includes both PvE and PvP characters. In this list, characters are ranked based on their defensive capabilities.

Offensive characters excel at dealing damage and finishing off the enemy quickly or efficiently. They also have a wide range of skills that can help them deal more damage to take down bosses faster.

They're all pretty powerful, but they excel at different things, so choose wisely when deciding which is right for you. In this list, characters are ranked based on their offensive capabilities.

These characters are neither the best nor the worst and can be used in a number of ways. They're versatile and have a good mix of abilities that make them useful in most situations. In this list, characters are ranked based on their overall usefulness.

Support characters have abilities that can help the other members of your party out by either protecting them or giving them an advantage in battle. They're not as powerful as offensive or defensive characters, but they're still pretty good at what they do. In this list, characters are ranked based on their support capabilities.

A tier list is a ranking of items, people or concepts, according to their relative power or worth. Tier lists are often used in games and can be found for many different types of games. In some cases, they may also be called tier rankings or ladder rankings.

2. Why do players use Princess Connect Re: Dive tier list?

Players use tier lists to help them understand the relative power of different characters in the game. This can allow them to make better decisions about who to use in their party and how to best utilize their abilities.

3. What is the best character in Princess Connect Re: Dive?

There is no definitive answer to this question. The best character depends on your individual playstyle and what you need from them. That being said, S-tier characters are generally considered to be some of the strongest in the game.

4. What is the weakest character in Princess Connect Re: Dive?

D-tier characters are generally considered to be the weakest in the game. They may have a difficult time fitting into certain party compositions, so be careful when using them.

5. How often is this tier list for Princess Connect Re: Dive updated?

The tier list is updated regularly as new information about the game becomes available. This allows players to stay up-to-date on the latest changes and make informed decisions about their party composition.

6. Who made this Princess Connect Re: Dive character tier list?

This tier list was made by the professional gamer. They have a wealth of experience with the game and know what it takes to make a successful party.

7. Is this Princess Connect Re: Dive tier list accurate?

This tier list is accurate as of the latest patch. It will be updated regularly to reflect any changes to the game.

A tier list is a useful tool that can help players better understand how different strong characters in the game are. Knowing this information is useful for creating a well-rounded party and winning more battles!

Thanks for sticking with me through this post. We've covered a lot of ground, so we hope you now have a better understanding of Princess Connect Re: Dive tier list and how it works. Be sure to check back often as we continue to update the list with new characters and information!

If you have any questions, feel free to leave them in the comments below, and we'll try to answer them for you. Thanks again and see you next time!