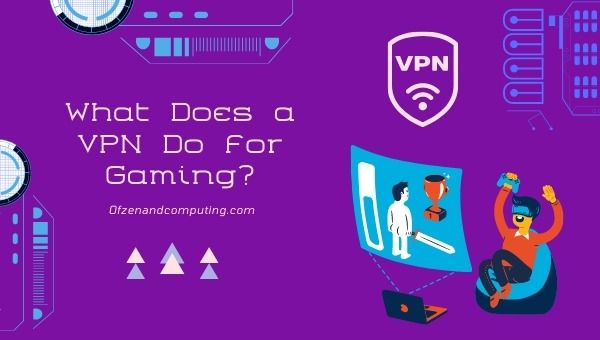 Online games have evolved somewhat over the years. Today, there are many titles that actually offer a fair bit of player interaction. From sports games to war zone simulations, these titles require much more than just good graphics and smooth gameplay.

To maximize enjoyment from these games, players often use a proper VPN while connecting with other players online and on game servers. Now there are different schools of thought when it comes to using virtual private networks for gaming.

Some people think Surfshark VPN gives an edge while some of them think that VPNs slow down the connection. If you are interested in knowing what a VPN does for gaming, then read on.

There are many theories about the advantages of using a VPN while playing games. Let us explore some of them in detail.

Virtual private networks have become an indispensable part of any gaming experience today. As most games demand multi-player interaction, one needs to connect through the internet with their opponents which is possible over public (less secure) networks.

Hackers are always on the prowl for vulnerable connections to take advantage of and cause harm to players who are not using appropriate protection tools. A VPN makes one's connection secure enough against these lurking threats.

Surfshark VPNs provide security by encrypting user data packets at the source, making it impossible for hackers to "sniff" one's personal information. The other benefit is that VPNs also provide anonymity when connected to an unsecured network such as a public Wi-Fi hotspot in a Café or at the airport.

This adds another layer of security and ensures that all data packets remain untraceable. Not even your ISP can monitor what you are up to while you are connected to the internet.

With a VPN, you would be able to play games using an IP address from any of the countries on your shortlist. This can be very useful in bypassing geo-restrictions that might make some titles difficult or impossible to access depending upon where you live.

If you have been denied access to a specific region because of your IP address, connecting through a VPN could help you enjoy the particular gaming service.

In fact, some websites offer users additional benefits such as better server bandwidth and improved speeds when they connect using an IP from another country.

Another big reason why gamers rely on VPNs is that it helps them beat ISP speed throttling that often happens in regions where bandwidth and speeds are limited.

The internet service providers throttle speeds to limit peer-to-peer downloads and streaming services as a result of which online multiplayer gaming becomes impossible.

Using a VPN can help gamers bypass this issue by providing them access to a more stable and faster connection even when throttling is in place.

Finally, VPNs can help gamers reduce the ping rate and improve gameplay. When using a VPN for gaming, one uses an IP address from another country rather than their local ISP's number. This means that there are fewer hops required to reach the game server.

This makes it possible for gamers to have faster response times, lesser dropouts, and smoother gameplay.

1. Does using a VPN affect gaming?

Using a VPN is essential to players who want to have an edge over their opponents. This is most important when you are competing with your friends online. It is not always the case that VPNs affect the speed of an internet connection.

2. What is the difference between a proxy and a VPN?

While both proxies and VPNs provide anonymity, there are some differences too. A proxy server keeps logs of your online activities while it reroutes your traffic through its own network or nodes which means that it can be traced back to you. A VPN on the other hand is always encrypted making it impossible for hackers or even ISPs to trace one's activities.

Most of the time, free VPNs do not have adequate infrastructure to keep up with high-intensity information packets being sent by gamers. This leads to speed throttling which will ruin the gaming experience.

4. How can I choose the best VPN for gaming?

The choice depends upon your requirements. Look for a VPN that has high bandwidth, fast speeds, does not keep any logs of user activity, uses high-level encryption protocols to offer security against DDoS attacks and information snooping, offers access to servers in different regions including those with low traffic and high speeds to offer the best gaming experience.

A VPN can help you bypass ISP throttling, access geo-restricted games, and enjoy faster speeds. These features make them an excellent choice for different applications such as streaming and playing games online.

Whenever you are connected to a VPN, you can avoid hackers and enjoy a more secure connection. These benefits allow gamers to focus on winning matches with less hassle, enabling them to play better and explore new titles as well.

The use of VPN is also beneficial for those who want to unblock games such as PUBG or Fortnite that are not yet available in their region. With all that said, you must be aware of using the right VPN with appropriate security protocols.